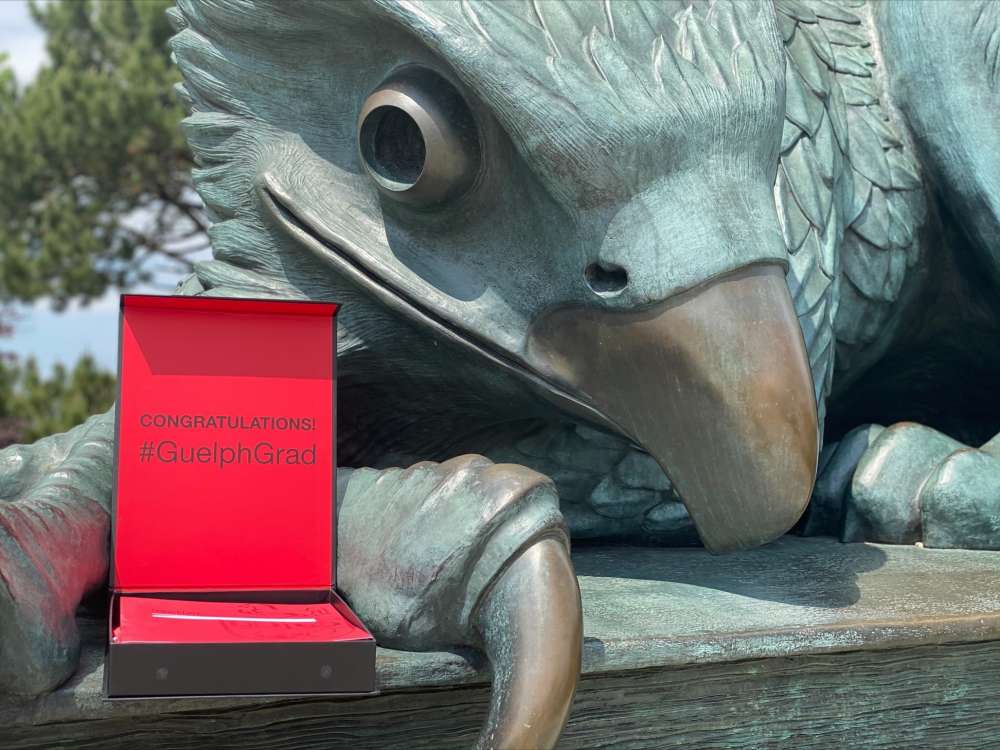 Nearly 5,000 new graduates will join the University of Guelph’s alumni family this month through a virtual graduation celebration that will include submitted videos from students crossing the “stage.”

Winter and summer graduates will gather online with their families and friends to watch the online celebration June 24 at 7 p.m.

As part of this event, all graduates have been mailed convocation boxes containing items for their at-home celebration, along with their degree parchments. One item will be a postcard that grads can scan for a video to allow them to feel the virtual experience of crossing the convocation stage.

A unique moment will feature a recorded roll call of grads’ names presented alongside photos and short videos that all graduates were invited to submit showing themselves crossing the “stage” in their chosen location. Given the creativity of the grads’ submissions, this part of the event is sure to be a highlight, said Claire Alexander, manager of U of G’s Office of Ceremonies and Events.

“Our plans for summer convocation, like so many other things, have had to be altered due to ongoing public health concerns,” said Alexander.

“The unique approach to this celebration, I think, will be appreciated by our grads, their families and our broader campus community. I am encouraging everyone to join us on June 24 to celebrate the graduating class.”

The virtual event will also feature messages from senior administrators, honorary degree recipients, members of the graduating class and alumni, as well as a musical tribute from U of G grads Jenna and Stu Walker of the group The Reklaws.

University of Guelph awards for distinguished service and academic achievement will be highlighted on the convocation website, with photographs and citations of the medal winners.

The W.C. Winegard Medal, U of G’s top undergraduate convocation award, will be presented to biological science student Julianah Oguntala. Named for former U of G president Bill Winegard, the award recognizes both academic achievement and contributions to campus and community life.

An advocate for increasing campus accessibility for people with disabilities, she served as a peer helper and educational assistant with U of G’s Student Accessibility Services. As an executive member of Students Facing Noma at Guelph, Oguntala organized fundraising for Facing Africa, which works to treat Noma diseases.

She also served as an executive member of U of G’s pre-med club and the Guelph chapter of Health Occupations Students of America.

The D. F. Forster Medal is U of G’s top convocation award for graduate students. Named for the late Donald Forster, a former U of G president, the medal recognizes academic achievement, leadership and citizenship.

The D. F. Forster Medal (magisteriate) will be awarded to creative writing MFA graduate Manpreet Dhaliwal. Dhaliwal served as MFA social media coordinator, led creative writing classes and advocated for transgender and racialized students while developing her own craft, which has been featured in several literary publications.

Dedicated to equity, diversity and inclusion, Mohsen advanced the academic and social goals of graduate students from varied backgrounds as vice-president internal of the Graduate Students’ Association. Blending academic and leadership skills, he served as science adviser for an international genetics research conference in 2020.

This year’s recipient of the Walter Vaughan Medal is computer science student Sooraj Modi. Named for a former secretary of Senate, the medal recognizes the contributions of a student member of Senate.

As a dedicated and well-informed Senate member, Modi made outstanding contributions to the University Senate, serving on the Research Board, the Planning and Priorities Committee and the Senate Governance Review Working Group.

Two Governor General’s Gold Medals are awarded each year for outstanding academic excellence by a graduate student. This year, those students are Cristine Reitz, a doctoral student in the Department of Biomedical Sciences at the Ontario Veterinary College and Anthony Incognito, who completed his PhD in cardiovascular physiology in the Department of Human Health and Nutritional Sciences.

Two Governor General’s Silver Medals are awarded to graduating students with the highest cumulative average in any undergraduate degree program. This year, those students are Joelle Dori Chandler, a bachelor of applied science honours graduate in adult development, and Sebastian Patrick Karpinski, who graduates with a bachelor of science honours degree in biomedical science.