Thousands of University of Guelph graduands will cross the stage during 2016 summer convocation ceremonies June 13-17.

Several faculty members and students will receive awards for teaching, service and academic achievement as more than 3,400 graduands cross the stage.

John Norman, a noted soil scientist and professor emeritus at the University of Wisconsin-Madison, will receive an honorary doctorate.

Nelischer will receive the Medal of Merit for outstanding contributions to teaching and other areas that improve academic life and character of the University.

As a professor and director of the school, he oversaw significant curriculum changes and twice led expansion of the bachelor of landscape architecture program.

As U of G’s first director of sustainability, he worked extensively with Physical Resources to redesign many prominent features of the University, including campus entrances and Branion Plaza with its new sustainable bike shelter.

Wolyn will receive the John Bell Award, named for the late John Bell, a former classics professor and department chair at Guelph, to recognize outstanding contributions to university education.

As associate chair of the Department of Plant Agriculture for eight years, he led development of the interdepartmental plant science major.

He has written 49 peer-reviewed publications, including nine in the past two years, and attracted external funding to the department.

Honorary degree recipient John Norman has helped to develop more than 20 measurement systems in soil science. He has contributed to models that help predict plant-environment interactions.

The W.C. Winegard Medal, U of G’s top undergraduate convocation award, will be presented to Joel Gretton. Named for former U of G president Bill Winegard, this honour recognizes academic achievement and contributions to campus and community. 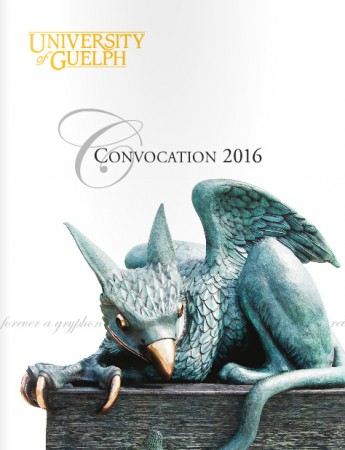 While studying environmental engineering at U of G, he belonged to Engineers Without Borders, Guelph Students for Environmental Change and Sustainability, the Water Environment Association of Ontario, the Guelph Innovation Society, InterVarsity Christian Fellowship and Power to Change.

During mission trips to Malawi and St. Lucia, he taught science and math, and organized shipments of supplies.

The Forster Medal, U of G’s top convocation award for graduate students, will be awarded to Melanie Wills and Lara Genik. Named for the late Donald Forster, a former U of G president, the medal recognizes academic achievement, leadership and citizenship.

Wills, a PhD student in the Department of Molecular and Cellular Biology, studies a cell signalling protein that may be implicated in human brain tumours.

She earned a curriculum innovation award for designing and teaching a first-year seminar course about science and media. She founded the Canadian Lyme Science Alliance to increase awareness of Lyme disease, and improve diagnosis and patient care.

Genik, a master’s graduate currently pursuing her PhD in clinical psychology, serves as a mentor to first-year students.

She volunteers with the Canadian Mental Health Association, the Trellis Supporting Kids in Camp program and the Special Olympics Ontario program.

This year’s recipient of the Walter Vaughan Medal is Arianne Cohen. Named for a former secretary of Senate, the medal recognizes the contributions of a student member of Senate.

Cohen is a bachelor of arts and science student senator, a member of the Senate Committee on Student Petitions and chair of the student Senate caucus.

She has coached Special Olympics and has volunteered with Project Serve Guelph, U of G Orientation, Best Buddies and Relay for Life.

The Governor General’s gold medal for top graduate student will be given to Calvin Tabert, a doctoral candidate in physics. Silver medals for top undergraduate students will be awarded to Gretton and human kinetics student Kaitlyn Orton. Holly Alexander at U of G’s Ridgetown Campus will receive the bronze medal for top marks among Ontario Agricultural College diploma students.