Several University of Guelph faculty members and students will be recognized for teaching, service and academic achievement during convocation ceremonies for about 3,500 students June 12-16. 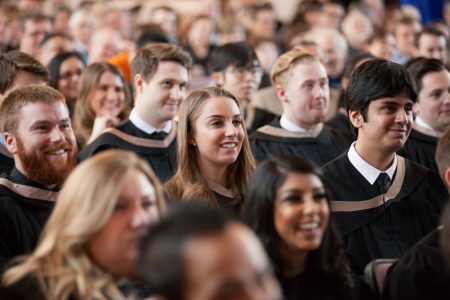 A top faculty award will be presented to Brian Husband, associate dean of the College of Biological Science (CBS). Clinical studies professor Laurent Viel will be named professor emeritus.

Husband will receive the John Bell Award, named for a former classics professor and department chair at Guelph to recognize outstanding contributions to university education.

Husband led the development of an honours undergraduate major in neuroscience that spans three colleges.

He also led faculty and staff from all three CBS departments in transforming first-year biology, creating three interconnected courses taken by about 2,000 students each year.

Viel has taught at U of G since 1984 and is known in equine medicine for studies of horse asthma. He pioneered the use of inhaled medication devices, reducing overuse of antibiotics.

The Excellence in Undergraduate Academic Advising Medallion will go to Linda Zehr, a program counsellor in the bachelor of applied science program.

Zehr, who has been a program counsellor since 2004, received a number of nomination letters noting her expertise, as well as her compassion and care for students.

The W.C. Winegard Medal, U of G’s top undergraduate convocation award, will be presented to Nia King. Named for former U of G president William Winegard, this honour recognizes academic achievement and contributions to campus and community.

The biomedical science student earned the top GPA among 865 students graduating from the College of Biological Science this year.

She served as research assistant on projects in Indigenous and international public health.

King has served as a mentor with Big Brothers and Big Sisters, and coordinated the TEDxGuelphU series. She ran the equivalent of five consecutive marathons across Death Valley for a worldwide education program using adventure learning.

The Forster Medal, U of G’s top convocation award for graduate students, will go to Matthew Little and Anthony Incognito. Named for the late Donald Forster, a former U of G president, the medal recognizes academic achievement, leadership and citizenship.

A PhD student in the collaborative program in population medicine and international development, Little spent 13 months in India studying diabetes and working to improve nutrition in rural populations.

At U of G, he mentored undergraduate and graduate students. He co-founded Guelph on the Bike, a cycling advocacy group, and Community Music Guelph, which runs concerts to raise money for Guelph charities.

Incognito, a master’s student in the Department of Human Health and Nutritional Sciences, received scholarships while co-authoring seven papers at U of G.

He is president of U of G’s Exercise Is Medicine initiative, a Canadian-wide program that promotes physical activity to prevent and treat chronic diseases. Incognito has been a student executive member of the University’s Centre for Cardiovascular Investigations and a regular speaker on nutrition.

This year’s recipient of the Walter Vaughan Medal is Carolyn Augusta. Named for a former secretary of Senate, the medal recognizes the contributions of a student member of Senate.

Augusta, who will receive her PhD in statistics, is student Senate co-chair at U of G.