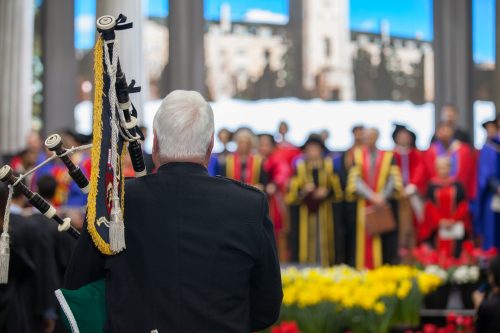 Several University of Guelph faculty members and students will be recognized for teaching, service and academic excellence during the University’s 2018 spring convocation ceremonies, to be held June 12-14.

A top faculty award – the John Bell Award – will be presented to Gerarda Darlington, a professor in the Department of Mathematics and Statistics, for her outstanding contributions to course and curriculum design at U of G.

She played a key role in the creation of the Science Commons at the U of G Library. Among her many accomplishments, Darlington has also received the YMCA-YWCA Woman of Distinction award for professional achievement.

The Excellence in Undergraduate Advising Medallion will be presented to Douglas Goff, a professor in the Department of Food Science, for his dedication to teaching, guidance and mentorship.

Goff’s research on frozen dairy products has been recognized internationally. He takes an interdisciplinary approach to teaching subjects ranging from functional foods and nutraceuticals to food engineering, processing and marketing.

The following professors will be named University Professor Emeriti:

U of G students will also be recognized for their achievements and contributions to U of G and the wider community, as follows:

The W.C. Winegard Medal, U of G’s top undergraduate convocation award, will be presented to Jeremy Seed in the College of Biological Science. Named for former U of G president William Winegard, this honour recognizes academic achievement and contributions to campus and community.

Recipient of numerous awards and scholarships, Seed has co-authored five papers published in leading peer-reviewed journals and has presented his work at national scientific conferences. He helped lead the varsity men’s rugby team that won the provincial title in 2016.

The Forster Medal, U of G’s top convocation award for graduate students, will go to Melissa MacKinnon and Jamie Rothenburger. Named for the late Donald Forster, a former U of G president, the medal recognizes academic achievement, leadership and citizenship.

MacKinnon was the top M.Sc. student overall in OVC both at the college level and within the Department of Population Medicine. She has received numerous academic awards and her research potential has been recognized nationally. She recently received a CIHR-CGS doctoral award as well as the University’s prestigious Brock Doctoral Scholarship.

MacKinnon has served as a mentor with Big Brothers and Big Sisters and as an equine veterinarian at the 2015 Pan Am games.

OVC’s Rothenburger will receive the D.F. Forster Medal at the doctoral level. She was the highest ranking doctoral student overall at OVC both for the college and within the Department of Pathobiology.

She has received numerous research awards, and her research findings have been published in top journals in her field. She has twice won OVC’s Zoetis Graduate Student Research Prize.

Rothenburger’s leadership and community engagement within the veterinary community has included performing spay/neuter surgeries on dogs in First Nation communities, parasite monitoring in gorillas and goat health management in Uganda, and coordinating One Health Leadership workshops and donations of scientific textbooks to Veterinarians Without Borders.

This year’s recipient of the Walter Vaughan Medal is Rebecca Cheskes. Named for a former secretary of Senate, the medal recognizes the contributions of a student member of Senate.

Cheskes, who graduated last June with a BA in international development, has been the Central Student Association vice-president (academic) and a member of the Student Senate Caucus, and has served on the Senate Board of Undergraduate Studies and the Working Group on Academic Policies and Procedures.

The Governor General’s award recipients are as follows: