‘Clearing the Plains’ Continues With Acquittal of Gerald Stanley: Prof 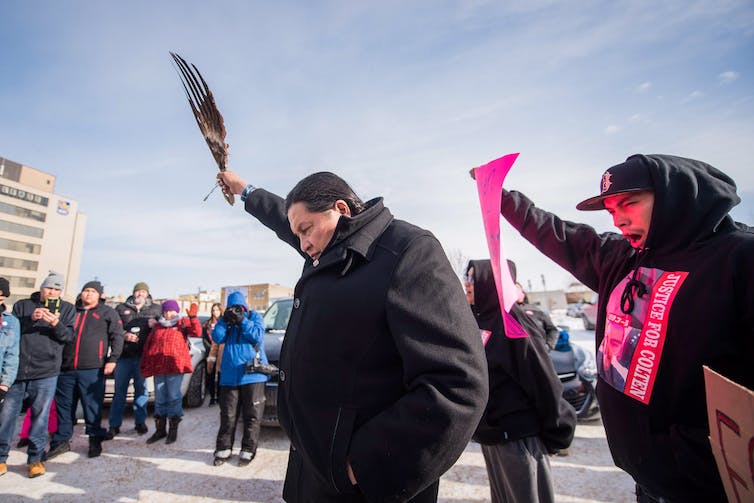 Editor’s Note: This article was originally published by The Conversation Canada and was picked up by the National Post and Global News.

The decision by an all-white jury, presided over by a white judge, to acquit the killer of Colten Boushie, a young Indigenous man from the Red Pheasant Cree Nation in Saskatchewan, is a severe test of the settler-based Canadian legal system.

It’s nice that Prime Minister Justin Trudeau acknowledged “the grief and sorrow the Boushie family is feeling tonight,” while “sending love to them.” But it’s time to step things up — including an overhaul of how juries are selected, an inquiry to ensure that Indigenous victims are not treated as criminals and a deep investigation into embedded racism within the police forces and the courts.

Those of us who are settlers must take responsibility for our institutions and stand with Indigenous peoples to ensure they can implement their own justice systems. Clearly ours are working all too well, but in destructive ways.

Media accounts provide a good overview of how Boushie’s friends were held and interrogated by RCMP in August 2016, who then released a statement intimating that his friends might have been thieves. Boushie’s friend Belinda Jackson, taken into police custody before she provided a statement, did not sleep or eat for 19 hours. Boushie’s mother, Debbie Baptiste, was told to “get herself together” after being informed her son had been killed.

Is it normal for police to tell you that your son is dead, imply you have a drinking problem and then search your home for clues? It seems so in Saskatchewan. The police acted as if they were an army of occupation in someone else’s home.

What does colonization and occupation look like? Statistically like this: In mid-2016, Maclean’s surveyed the 265 most powerful positions in Saskatchewan’s legal, educational, business and legislative systems: 4.5 per cent of positions were filled by Indigenous peoples. Only two of 101 judges are Indigenous — in a province where 81 per cent of inmates in provincial jails are Indigenous.

A recent poll indicated Saskatchewan residents viewed the relationship between Indigenous and non-Indigenous people more negatively than anywhere else in Canada, and 41 per cent of respondents blamed “Aboriginal peoples” for inequalities and problems. Saskatchewan was also the home of the last federally funded Indian residential school. One of its survivors, Darren Maxie, told Maclean’s: “It is their system, not ours…Every institution belongs to them. We are not allowed in.”

Maxie’s observation rang true over the course of the murder trial of white farmer Gerald Stanley. Boushie’s family filed five complaints against the RMCP for their mistreatment and petitioned for a Crown prosecutor from outside the province to lead the case.

The larger context of this acquittal is cultural genocide — even genocide as defined by the United Nations. Over two years ago, the Truth and Reconciliation Commission concluded cultural genocide had been committed in the Indian residential schools system. Because of its mandate, the TRC could go no further, although commissioners also articulated the case for the violation of the United Nations Convention on the Prevention of Genocide.

We can see the residential schools as genocide and the use of starvation tactics to “clear the plains” of Indigenous peoples, a term popularized by James Daschuk in his book Clearing the Plains.

Echoes of the past

In 1991, a notorious racist from Prince Albert stood trial for the murder of Cree trapper Leo LaChance. LaChance walked into a pawn shop owned by Carney Nerland, only to be shot in the back and killed by Nerland.

Nerland claimed he accidentally fired his rifle because he did not know there was a bullet in the chamber. Sound familiar? Gerald Stanley provided a similar justification for his “accidental” shooting of Boushie. Nerland, head of the Church of Jesus Christ Christian Aryan Nations, was found guilty of manslaughter and was sentenced to four years.

In this small world of prairie law, the presiding judge over the Stanley trial was Martel Popescul, who represented the RCMP in the Nerland trial. After that trial, many rightly called for an inquiry to investigate the extent to which Nerland’s racism was a factor in Lachance’s killing, an inquiry Popescul sought to block on behalf of the RCMP, arguing that police informants might be exposed.

The Stanley decision demonstrates yet again that not only are white farmers above the law, but young Indigenous men may well be below it. That is, they cannot rely on the protection of settler law because it is not designed to protect them.

The basis of this goes way back to the doctrine of discovery – the 15th century belief that Europeans “discovered” North America and gained sovereignty and title despite the fact Indigenous peoples had owned the land for many millennia. Because this doctrine remains embedded in Canadian law, racist violence may continue indefinitely unless we stop it.

Even south of the border, where guns proliferate, in 2014 there were no justifiable homicides involving American Indians either as victims or shooters, according to the latest report from the Violence Policy Center.

In a different world, Colten Boushie might have owned his own farm. It did not just “mysteriously” happen that most of the farmers in Saskatchewan are white or that the legal system is dominated by settlers. Indigenous peoples were prohibited by the 1867 Indian Act from homesteading on the prairies. In section 70 we had “Disabilities and Penalties,” confining Indigenous families to a maximum of 160 acres for a family of five (much less for smaller families). By contrast, settlers could gain free land: “160 to 320 acres per head of family.”

Much was made about Boushie and his friends having had too much to drink on the day he was killed. The concept of “drunken Indians stealing” from white settlers also goes back to the early days of colonization. In 1868 federal laws prohibited Indigenous peoples from purchasing or consuming alcohol. Under the Indian Act, even possessing alcohol was illegal. This was only formally changed by an amendment in 1985.

In her recent book Dying from Improvement, Sherene Razack observes that as western settlement proceeded, Indigenous peoples were marked “materially and symbolically,” as bodies who were “not up to the challenge of modern life” — a condition that leaves the settler as “legitimate heir to the land.”

Myths of the inevitability of Indigenous disappearance allowed settlers to evade responsibility for the negative impacts of colonization, since they are only there to promote western civilization and law, while Indigenous peoples are “dying due to an inherent incapacity to survive modern life.” It seems that even when a white farmer pulls a trigger, these types of ingrained myths continue to be influential.

The jury could have found Stanley guilty of manslaughter: “a homicide committed without the intention to cause death, although there may have been an intention to cause harm.” With a firearm involved, the minimum sentence is four years. Nerland received four years in prison and served three. Stanley is free and gained almost $33,000 in one day from almost 500 people through online crowd funding.

The TRC, in Call to Action 45, called on the federal government to repudiate the doctrine of discovery while implementing the UN Declaration on the Rights of Indigenous Peoples. Thanks to the stellar efforts of MP Romeo Saganash, Bill C-262, “An Act to ensure that the laws of Canada are in harmony with UNDRIP,” has just been passed in the House of Commons.

This bill won’t change attitudes, but it can shift the underlying laws and the frameworks for making policy, and ensure that Indigenous peoples and settlers who support them can ensure that there are no more miscarriages of justice.

David MacDonald is a political science professor and research leadership chair in the College of Social and Applied Human Sciences.