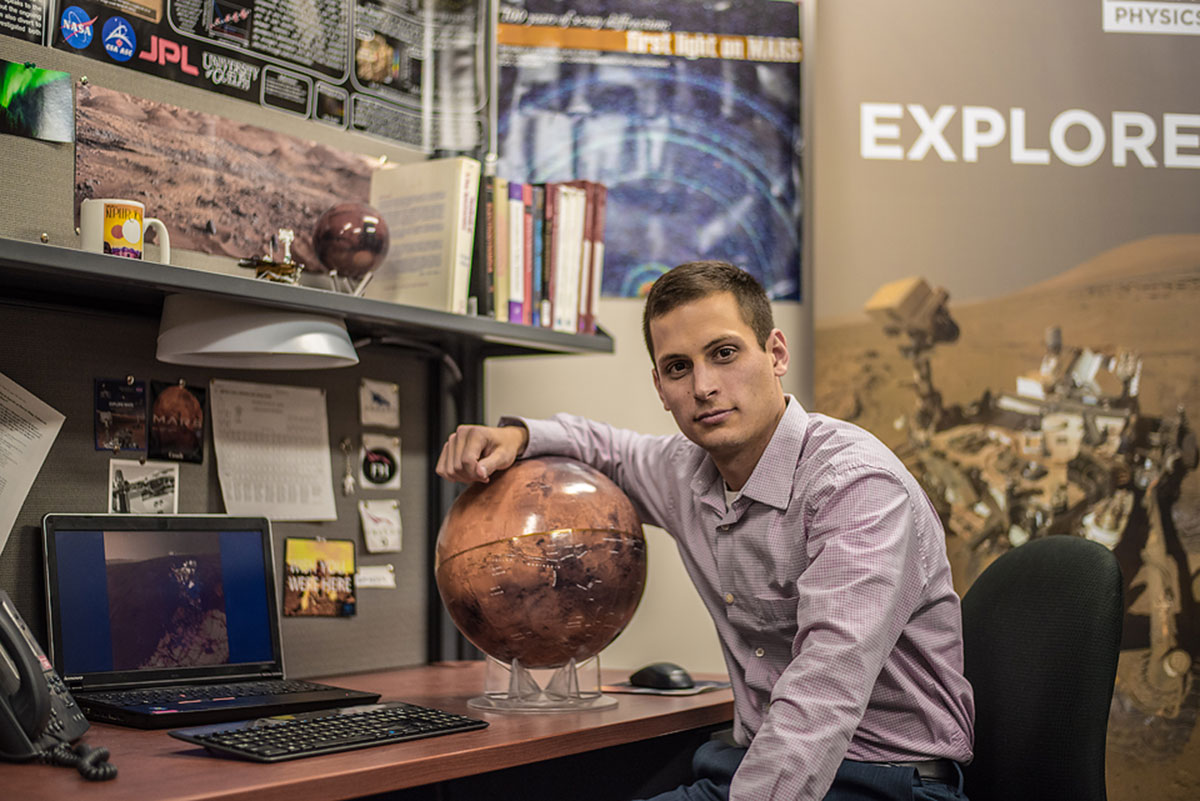 More than five years ago, Scott VanBommel watched a rocket roar into the sky, propelling the Curiosity rover to Mars.

Now the University of Guelph student hopes to become one of Canada’s next astronauts, a prospect that may line him up to be among the first humans to blast off on a voyage to the red planet.

Last week, VanBommel was among 72 astronaut candidates shortlisted by the Canadian Space Agency (CSA). He was one of nearly 4,000 applicants last summer after the CSA announced its current competition.

The agency will name two astronauts by August, and the U of G physics student and former Gryphon hockey player aims to be one of them.

This summer, VanBommel will complete his PhD. He’ll also undergo numerous CSA tests designed to probe his physical and mental fitness for working in space, including everything from potential missions on the International Space Station to a possible voyage to Mars.

“Being an astronaut encompasses everything I enjoy,” he says, referring to constant learning, hard work, teamwork and science outreach.

Growing up in farm country in Norwich, Ont., near Woodstock, VanBommel was consumed with hockey.

He started playing around age 7. He started as a house league goalie his first year, then made a triple-A team in his second year. Playing all over southern Ontario meant plenty of lengthy car rides with his parents — and lots of conversations on just about anything.

“I’ve always been the type to ask questions — how things work, how things are the way they are. I was probably the most annoying kid for a parent because I was asking questions non-stop.”

When he came to U of G to begin his B.Sc. in 2006, he was thinking about becoming a teacher like both his parents.

In his fourth year, he worked on a project for the first time with Prof. Ralf Gellert, head of a U of G research team that designed and calibrated an instrument carried to Mars aboard a roving science laboratory.

About the size of a Rubik’s cube, that instrument — called an alpha X-ray spectrometer (APXS) — is mounted on the rover’s robotic arm. Testing soil and rock samples, it looks for evidence that features on the red planet were sculpted by water, or that the planet might once have supported life.

VanBommel was still in high school when the rovers Spirit and Opportunity landed on Mars in early 2004. By 2010, Spirit stopped working. (Opportunity is still sending data to Earth.)

VanBommel studied data from Spirit for that senior project, and found himself hooked. “The death of Spirit was the birth of my career in space exploration,” he says.

By then, he had decided to pursue a master’s degree. He joined Gellert’s team of researchers, who were analyzing data from the earlier rovers and helping prepare for the launch of a new instrument aboard the next Mars rover.

In late 2011, he watched Curiosity’s launch for its journey to Mars.

Six months later, VanBommel was among a crew at NASA’s Jet Propulsion Laboratory in California, waiting for a sign that the rover had survived its perilous landing. Recalling the cheers after a signal arrived from the Martian surface, he says, “That was probably the highlight of my life.”

Since then, VanBommel has continued to work with Gellert’s team in a specially outfitted operations centre in the MacNaughton Building.

As part of an international APXS group, the team helps direct the rover’s daily operations, and receives information from Curiosity for analysis. He says operating a vehicle on Mars is a bit surreal. “You just did something that will affect what’s happening on another planet.”

It also has its light moments.

Team members get a chance to name certain Martian features under exploration. One day, VanBommel and other Guelph team members were on shift while the rover was looking at a yet-unnamed rock.

The name Winnipeg popped up on the provided list. It referred to a town in the U.S., but the Canadians couldn’t pass it up. VanBommel says Canadian media chased the story to the Manitoban capital.

“It’s an amazing opportunity to be part of historic missions,” he says. “Opportunity is the longest-driving rover on the surface of something other than Earth. It’s contributing to our global science knowledge.”

About two years ago he realized that his Guelph experience might lend itself to an astronaut career. Last summer’s CSA competition was the first call since 2009.

VanBommel figures his academic and athletic background have lent him the requisite physical and mental toughness. He played Junior B for two years in Guelph, and then minded net with the Gryphons for four seasons.

Last week, VanBommel was in a Curiosity team meeting when he learned he’d made the CSA shortlist. He had to wait to share his email with Gellert and other colleagues. “There was a big sense of relief and happiness,” he says.

Current NASA plans include a Mars mission in the mid-2030s. VanBommel says the red planet was once much like Earth, and it’s still possible that Mars harbours signs of life.

“You could argue that the search for life outside Earth is one of mankind’s biggest questions,” he says.

After the CSA announced its shortlist last week, VanBommel visited schoolkids back home in Norwich.

There, a student asked for his autograph. VanBommel said she could have his autograph, as long as the kids gave him theirs. He wanted to make the point that the youngsters could pursue dreams and goals as well.

Glancing at the scrawled sheet of notepaper pinned above his desk, he says, “I was a kid like her.”