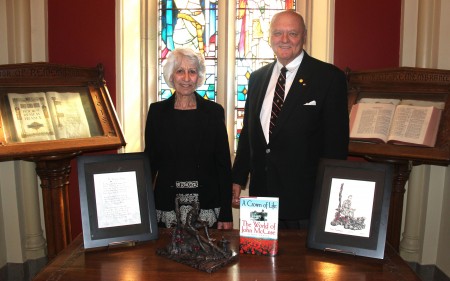 Eleanor and Ron Durst with the John McCrae statue and other memorabilia displayed in U of G’s War Memorial Hall.

As a military veteran, retired Lt.-Col. Ron Durst has seen and experienced things that most Canadians can’t even imagine. His 34 years in the Canadian Armed Forces took him around the world with the UN and NATO, including tours of duty in global hotspots like Cyprus, the Middle East and Europe.

To honour those who served and those who never returned, Durst and his wife, Eleanor, donated to U of G a statue of John McCrae, who penned “In Flanders Fields” while serving in the First World War. Sculpted by Ruth Abernethy of Wellesley, Ont., the statue depicts McCrae writing his famous poem seated among red poppies representing each of Canada’s artillery regiments.

“Eleanor and I are delighted to donate the maquette to the University to be displayed in War Memorial Hall for future generations to view and enjoy as a tribute to this world-renowned poet, scholar and doctor,” says Durst. “John McCrae symbolized the commitment to country and to humanity.” Their gift also honours the University’s role in educating generations of students, some of whom served in the military.

Guelph residents joined forces with artillery regiments across Canada to raise money for two identical statues of McCrae to mark the 100th anniversary of “In Flanders Fields.”

Mike McKay, a Guelph businessman and a retired reservist lieutenant-colonel, was one of the driving forces behind the statue project, along with former U of G president and MP William Winegard, who joined the navy at 17. They led the $300,000 fundraising effort for the Guelph statue at the Guelph Civic Museum. A second effort collected about $460,000 for the Ottawa statue. Both statues were unveiled in 2015.

One hundred maquettes were also made. As a key contributor, Durst received the No. 16 maquette, which he donated to U of G this past spring. The statue now sits in the chapel in War Memorial Hall, along with an illustration of the statue, a print of the poem and a copy of the book, The World of John McCrae. Queen Elizabeth II was also presented with one of the maquettes.

McCrae was born to Scottish immigrants in Guelph in 1872. During a severe bout with asthma, he took a year off from his studies at the University of Toronto, and taught English and math at the Ontario Agricultural College.

He graduated with a medical degree in 1898 and served in the Boer War in 1899, where he led an artillery unit from Guelph.

Then came the First World War, which brought McCrae to Ypres, Belgium, where he treated hundreds of wounded soldiers on a daily basis. When his asthma worsened, he developed bronchitis and later died of pneumonia and meningitis in January 1918.

The University of Guelph bears other vestiges of war, including the British naval cannon in Branion Plaza, nicknamed Old Jeremiah, and War Memorial Hall, dedicated to those who died in the World Wars.

The campus was also a training ground for Canadian soldiers. During the Second World War, the Royal Canadian Air Force set up its Wireless School here. Training continued until the mid-1960s for members of various training corps.

“The University provided a vehicle to train and educate Canadians who stood on the line and protected the freedoms that we have,” says Durst. “We made a tremendous contribution to the war effort through the training process. There was significant involvement on the part of university students and faculty.”

Durst and McCrae share similar military backgrounds. Both became cadets at 14, joined the militia at 17 and became gunners. Durst’s family served in the Second World War, so it was “natural” for him to enlist, he says. He served in various command and staff appointments as a logistics officer and combat service support officer.

As for the statue, “Now it has a proper home and that’s what’s important,” says Durst. “It’s not just dedicated to John McCrae; it’s dedicated to the idea of nationhood and to all those who have served.”