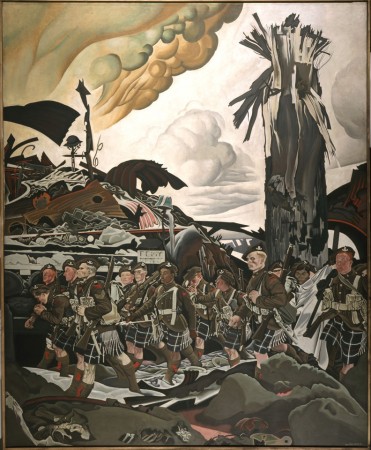 Playwright William Staebler Atkinson served in the 16th Battalion of the Canadian Corps, made famous by British war painter Eric Kennington in his painting, The Conquerors, above.

Both of Alan Filewod’s grandfathers served during the First World War, but neither shared his experiences back home. A century on, their stories are likely lost forever to the University of Guelph theatre studies professor.

Now, by studying a handful of mostly overlooked plays based on the conflict and written decades ago by Canadian veterans, Filewod feels he’s caught an echo of what was left unsaid.

“My grandfathers never talked about it. Reading these plays helps me understand why that might be the case,” says Filewod, School of English and Theatre Studies.

He will speak about his research project as part of the University’s Remembrance Day ceremony Nov. 11 in War Memorial Hall.

Over the past two years, Filewod has dug into library archives to salvage six mostly unknown scripts written by servicemen after the First World War.

As far as Filewod knows, few of them saw public performance, at least at the time they were written.

He says that was probably a good thing for Glory Hole: A Play of the Great War by Winnipeg playwright William Staebler Atkinson.

Written a decade after the war, the play with its bleak existentialism would likely have curdled with homegrown audiences that saw the war as a coming-of-age moment for their country.

Referring to Atkinson, Filewod says, “He would have been run out of town.”

Atkinson spent eight months at the Ypres Salient in Belgium, where Canadians and other Allied troops dug into trenches near the beginning of the war. Back in Canada after the war, he worked as a hospital administrator and then with an insurance company. He wrote the play in 1929.

Set entirely in a dugout trench, Glory Hole follows a handful of soldiers killed one by one until only a single teenager is left. Apart from a countdown to an explosion by the play’s end, there’s no real plot, says Filewod.

“When I read it, I thought: Wow, this is something really interesting theatrically, as if he’s inventing theatrical modernism without knowing it. It almost reads like Waiting for Godot.”

That grim sensibility may clash with the “commemorative rhetoric” that Filewod expects will surround Canadian government events marking next year’s centenary of the battle at Vimy Ridge. That battle saw all four divisions of the Canadian corps fighting together for the first time in the war.

“We will hear lots about patriotism — a ‘nation forged at Vimy Ridge,’” says Filewod. Pointing to the sober recounting of earlier events in Atkinson’s play, he says, “I want to reclaim what it really was.”

War’s brutality is also the theme of a second play, Dawn in Heaven, written by another Winnipegger, Simon Jauvoish. The play about an idealist soldier traumatized by war was performed in the playwright’s hometown in 1934.

At one point, the character is disciplined by being tied in spread-eagle fashion to the wheel of an ammunition cart and left for hours — a documented form of punishment for disobedience.

“Men at the front were always infested with lice. You’re tied for three hours in the rain and mud, covered with lice and left there,” says Filewod. “This experience shattered him.”

Norman Craig, a fighter pilot in the war, wrote another play called You’re Lucky If You’re Killed in the 1930s.

Set partly in Fergus, Ont. — and staged there in 1933 — the play follows a group of returned veterans at a party where a military policeman is ultimately shot and killed. 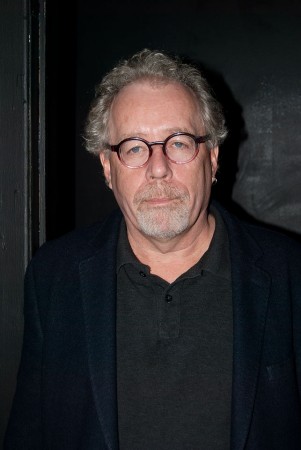 While tracking down the playwrights’ military records, Filewod found that most of them suffered injury and trauma overseas. Jauvoish, for instance, was subjected to various forms of punishment and was wounded at Vimy Ridge.

The Guelph professor says events in the works appear largely autobiographical, offering a soldier’s-eye view of atrocities that veterans such as his grandparents chose not to share back home.

He believes the authors were drawn to the immediacy of theatre, which can engage audiences in an act of witness. “They wanted to reach something that language can’t express. They’re scenes that reenact the experience.”

At least one play took a different tack.

The production travelled across Canada, including a performance in Guelph’s former opera house downtown. The troupe raised funds to help pay for construction of the commemorative Soldiers’ Tower completed in 1924 at the University of Toronto.

Filewood first became interested in the topic when he spotted a notice about the Jauvoish production in a Winnipeg newspaper. That led the Guelph professor to hunt down Canadian playwrights who set their works in the First World War. Most of the typescripts existed only in microfilm and were the only works ever written by the authors.

Three of the six plays were written by immigrants, adding different facets to the collective Canadian narrative of the past century’s conflicts, says Filewod.

His paternal grandfather arrived in Canada with the British navy in 1910 and worked at the hospital naval base during the Halifax Explosion in 1917.

“There’s Canadian history on every side of every modern war,” says Filewod, who plans to write a book about the project. “In a sense, this project is about complicating our sense of Canadian history.”