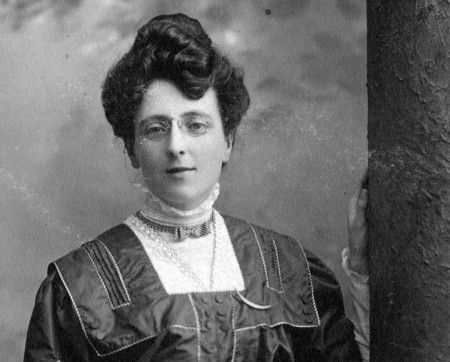 In 2000, the manuscript of Lucy Maud Montgomery’s book Rilla of Ingleside was donated to the McLaughlin Library’s Archival and Special Collections. The book, published in 1921, tells the story of Rilla, daughter of Anne of Green Gables, and her experiences during the First World War.

The manuscript tells another story: the many edits and revisions vividly illustrate Montgomery’s creative process.

“At the emotional points in the novel, you can see how hard Montgomery worked to find the right words,” says Jen Rubio, publisher at Rocks Mills Press. In February she published a transcription of the manuscript with the title Readying Rilla. “In many places words and sometimes whole sections are crossed out, redone and then reworked several more times. You see how careful Montgomery was and how attentive to detail.”

Kate Waterston, granddaughter of U of G professor emeritus Elizabeth Waterston, originally transcribed the manuscript. Montgomery’s handwriting is notoriously hard to read, says Rubio. Waterston also came up with a system to indicate the revisions, which were done by hand on the original pages, and to add in notes that Montgomery listed on separate pages.

Tragically, Kate Waterston died in November 2015 of a pulmonary embolism. Elizabeth Waterston kept the document Kate had created and eventually approached Rubio about publishing it.

“We thought it would be a small thing,” says Rubio, whose mother, Mary Rubio, is a University of Guelph English professor who has also studied Montgomery’s work. “But I’ve had phone calls and interest from around the world.”

Montgomery kept an extensive journal during the war and also collected newspaper clippings. Accuracy was important to her, and in some cases the manuscript shows corrections she made after checking the newspaper clippings. In other spots, she adds a humorous paragraph or two to balance out a less cheerful part of the book.

Rubio says it’s compelling to see how much work Montgomery put into the process. “Creativity has many aspects — it’s not just one fast flow of writing and you’re done,” she says. “There’s creativity in the editing and reworking, too.”

Rubio says Rilla of Ingleside is one of the few books that made her cry. It was the first to explore the war from the point of view of a woman who “kept the home fires burning.” Rilla is a self-centred young teenager at the beginning of the novel. Rubio says the editing shows how Montgomery carefully and successfully showed how Rilla changed through the war years of the novel.

Rubio is currently working on an edition of Montgomery’s journals, which are also in the U of G archives. “The University’s archives are one of the best collections on the planet,” says Rubio. “You can find some wonderful things in there.”