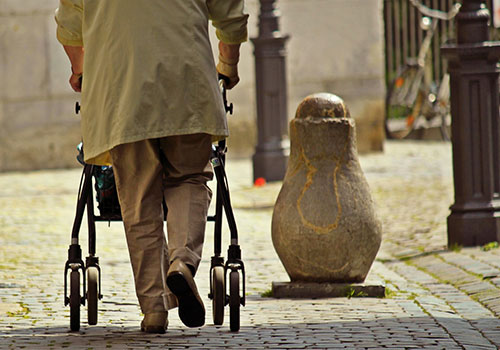 As we age, we begin to lose muscle mass, which can lead to loss of strength, speed and power. Researchers at the University of Guelph are trying to understand why this happens and what can be done to protect muscles as we age.

Prof. Geoff Power joined the Department of Human Health and Nutritional Sciences (HHNS) in fall 2015 to study the effects of aging on muscles.

The loss of muscle mass is known as sarcopenia. “If the muscle get smaller, it produces less force,” he says. Muscle quality also deteriorates with age, causing muscles in older people to behave differently than those in younger people, even if they have the same muscle mass. Power’s research will focus on what’s responsible for these changes at the molecular level.

He will also examine muscle mass in the very frail and compare them to masters athletes in the same age group. “These individuals are the crème de la crème of aging,” he says of the masters athletes he studied in a collaborative project with McGill University. “When we look at their muscle properties, they seem to have a maintained number of motor units.”

A motor unit consists of a motor neuron and the muscle fibres it activates, which makes up the basic functional unit of contraction. More motor units mean more muscle mass and greater strength.

“Exercise is definitely an important contributor to functional performance,” says Power. You don’t need to be a world-class athlete, he adds, but staying active, even later in life, can help reduce muscle loss.

Power holds a PhD from Western University, where he studied at the Canadian Centre for Activity and Aging. He came to U of G as a postdoc from the University of Calgary. “Ontario has a lot of high-impact researchers in a dense area, so the opportunities for collaboration were really high,” he says.

While at the University of Calgary, he did a postdoctoral fellowship with Walter Herzog, Canada Research Chair in Molecular and Cellular Biomechanics, focusing on age-related cellular and subcellular changes in muscles.

“That’s where I got into the single-cell measurements, so I could investigate these age-related impairments and functions at the single muscle-fibre level.” His research earned him a CIHR Banting Postdoctoral Fellowship and a Killam Award.

At U of G, he plans to combine his areas of research expertise, looking at neuromuscular function in aging adults. He looks forward to collaborating with colleagues in HHNS and teaching biomechanics and anatomy.

Emily McIntosh, one of his PhD students, is studying how muscle weakness contributes to balance problems in the elderly. “Statistically, older adults who have less muscle tend to fall more often,” she says. “We don’t actually know why mechanistically.”

She is studying how muscle changes with age, and how that affects strength and balance. By placing subjects on a moving robotic platform, she can examine their reactive balance, which helps people respond to sudden changes in their environment, such as slipping on ice.

As a volunteer fitness instructor for the elderly, she has seen the effects of falls, particularly hip fractures. “It’s hard on the family, and the mortality rate is huge. It completely changes their lives.”