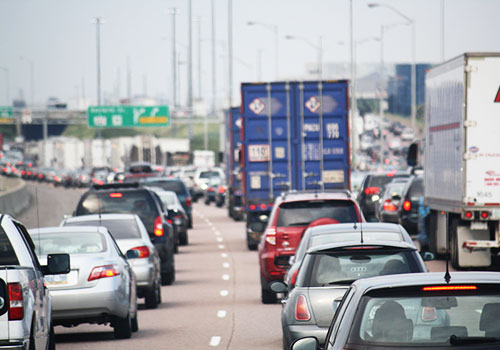 “Stopped” by Danielle Scott used under CC BY 2.0

People who live near highways can breathe a little easier, thanks to a new type of sound barrier that can help clean the air.

Air pollution is responsible for 3.7 million deaths each year, according to the World Health Organization. Research shows that air pollution contributes to cardiovascular and respiratory health problems, especially among children and the elderly.

The School of Engineering at U of G partnered with Envision SQ, a Guelph-based company, to develop the SmogStop Barrier, which can remove up to 50 per cent of air pollution. Testing was conducted at the University of Ontario Institute of Technology and Western University.

“There’s a couple of technologies involved,” says Prof. Bill Van Heyst, School of Engineering. “One is through airflow we create more dispersion around the noise barrier, so those people who are living in close proximity to the noise barrier will not have as high a concentration of pollutants affecting them. The second is the photocatalytic coating.”

The walls are made of transparent acrylic, and a photocatalytic coating on the surface reacts with sunlight to convert harmful nitrogen compounds, such as nitric oxide, into nitrogen gas, which makes up 80 per cent of the Earth’s atmosphere. “It’s no longer a toxic chemical,” says Van Heyst, adding that the coating could also be applied to other surfaces, such as windows.

A channel behind the wall helps divert air downward where it comes into contact with the coating. Plants at the bottom of the wall will also help remove particulate matter from the air.

According to Envision SQ, one kilometre of the barrier can remove 16 tonnes of air pollution a year, which is equal to removing 200,000 cars from that stretch of road.

Once the test results have been analyzed, says Van Heyst, the researchers will continue to improve the walls, which could be ready for installation as early as 2016.