A mental health program for farmers, created by experts in the Ontario Veterinary College at the University of Guelph, has received $385,000 from the Ontario government.

The province announced today that it is investing in the In the Know initiative. The program helps farmers better identify, understand and cope with the many mental health challenges they face in their profession.

Run by the Canadian Mental Health Association (CMHA) Ontario, the program was developed by Dr. Andria Jones-Bitton and Dr. Briana Hagen, a post-doctoral researcher, both in the Department of Population Medicine.

“Some of those stressors have been around for centuries, like weather, a demanding workload and finances. The research we’ve done has also shown there are newer stresses. Things like the vilification of farming and agriculture have a big impact on farmers. Intense pressure from wanting to preserve the legacy of a family farm is also a major contributor to stress.”

The program is based on previous research by Jones-Bitton that revealed farmers experience higher rates of psychological distress and mental health concerns than the general population and are also less likely to seek help. Recent research by Jones-Bitton and Hagen has found that a lack of accessibility to mental health supports and services, mental health stigma in the agricultural community and a lack of anonymity were among the main reasons that farmers aren’t seeking the support they need.

One of the main goals of In the Know is to increase help-seeking among farmers, said Jones-Bitton.

The program is being launched in 18 agricultural areas in Ontario and will be delivered by a mental health professional with agricultural experience or with a co-facilitator from agriculture. The online half-day training session provides education on topics such as stress, depression, anxiety, substance misuse and how to start a conversation around mental health and well-being.

Manitoba is currently running the program, while other provinces are also gearing up to introduce it.

“CMHA Ontario is honoured and thrilled to be launching In the Know through CMHA branches around the province,” said CMHA Ontario CEO Camille Quenneville.

“We know this program will give the agricultural community the opportunity to discuss mental health openly and safely. We strongly believe that In the Know, with its farming-specific scenarios that put mental health into perspective for agriculture workers, will resonate well with this community and improve lives as a result.” 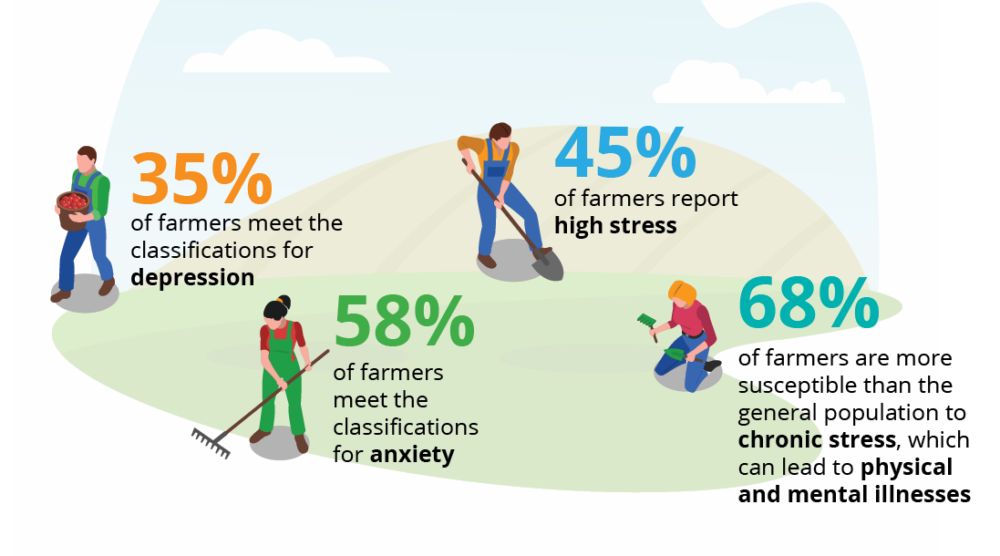 Jones-Bitton began working on the program in 2015 with funding from the Ontario Ministry of Agriculture, Food and Rural Affairs and matching funds from a number of agricultural organizations.

“We worked to create the In the Know training program to teach mental health literacy to people working in agriculture,” Jones-Bitton said, adding that numerous agricultural and mental health stakeholders were involved in its development.

“It was very much created with farmers, for farmers.”

A pilot of the In the Know training led by Hagen in 2019 showed the course increased participants’ mental health knowledge and their confidence in recognizing mental health struggles, speaking about mental health and helping others who are struggling.

The program is a partnership between U of G, the Ontario Federation of Agriculture (OFA) and CMHA’s Ontario Division. Training is being made available through CMHA branches thanks in part to a donation from Trillium Mutual Insurance.

“As an organization, we are thrilled to be part of the launch of this program,” said Peggy Brekveld, OFA president. “Increasing our awareness and confidence discussing mental health will contribute to resilience for farm families and rural communities across Ontario.”

“We are delighted to be partnering with CMHA Ontario and the OFA and are confident that the In the Know program is in great hands in being made available to agricultural communities across Ontario.”

This funding announcement builds on the research and innovation excellence of the Ontario Agri-Food Innovation Alliance, a longstanding collaboration between the Government of Ontario and the University of Guelph. The Ontario Agri-Food Innovation Alliance is focused on elevating and transforming Ontario’s agriculture and food sector, the people and businesses who work in it, and the consumers and communities who rely on it.