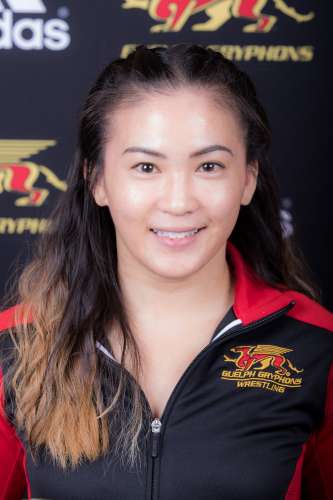 Natassya Lu competed for U of G for five years. She is about to move into coaching, while continuing to compete at the club level.

Natassya Lu became a wrestler in high school on a dare. A friend challenged her to take up the sport and she accepted.

Lu had some losses in that first year, but they motivated her to work harder and get better. She embraced the attitude that there is no failure in the sport; you either win or you learn. She learned and got very good, very quickly. She went from being eliminated in early tournaments to representing Canada at the Pan American Games in her first year of competition.

“I was very lucky to have a coach that picked up on my abilities and really supported me throughout my whole high school career, making sure I got the opportunities I needed to keep my career going,” said Lu, a graduate of U of G’s landscape architecture program who is now completing a master’s degree. “That support continued at U of G.”

Between 2013 and 2019, Lu competed with the Guelph Gryphons women’s wrestling team, earning four Ontario University Athletics medals — including gold in both 2017 and 2019 — and 2017 bronze and 2019 silver U Sports medals in national competition. She was an academic All-Canadian.

In 2019-20, she served as the Gryphons team manager and earned U of G’s Cathy Rowe Manager of the Year Award.

This year, the exceptional athlete and scholar landed an opportunity to enter coaching. In March, she was among 18 women across Canada selected for the 2021 U Sports Female Apprentice Coach Program. 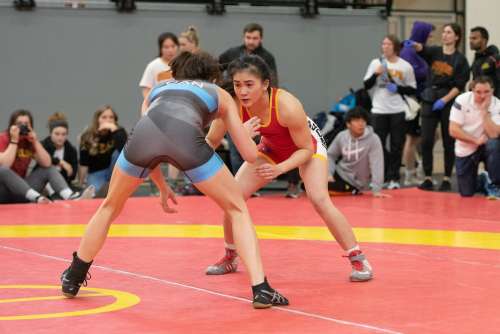 Lu competes on the wrestling mat for U of G’s Gryphons.

The program aims to increase the number of women coaches in Canadian universities. It matches apprentice coaches who have recently graduated with a mentor coach in one of the 11 U Sports-sanctioned sports for women.

“My coaches have been some of the most supportive people in my life and I owe a lot of my success to them,” Lu said. “I want to follow in their footsteps. I think I have a lot to offer, not only as a female coach and one of the first female coaches on the team but also as a young coach who will still be competing with the Guelph Wrestling Club once the pandemic is over.”

Long-time Gryphon wrestling coach and two-time Olympian Doug Cox said coaching is a perfect fit for Lu. A talented and driven individual with superb leadership qualities, Lu has an outstanding work ethic and is passionate and knowledgeable about the sport, he said.

The first person in her family to be born in Canada, Lu grew up in Brampton, Ont. Her parents are of Chinese heritage and were born in the Philippines. 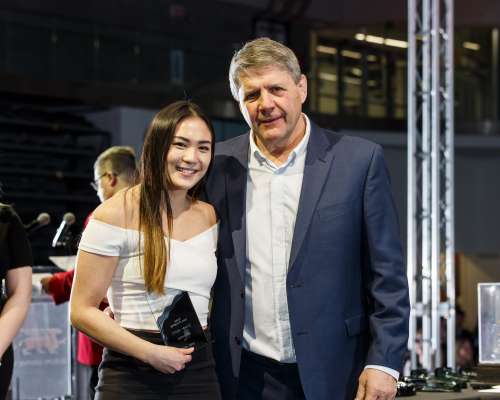 Lu with long-time U of G wrestling coach and two-time Olympian Doug Cox.

Wrestling at U of G brought out her athletic ability and was instrumental in building confidence that extended to all areas of her life.

“Wrestling is an individual sport. When you go out on the mat, it is just you alone out there against another person. It’s face-to-face and hand-to-hand combat and it’s very nerve-racking.”

The sense of vulnerability is intense, she said. The crowd is watching your every move. Getting pinned and losing can happen at any moment. For her, there was no experience more anxiety-inducing than approaching the mat before a bout.

“If you do lose, you have to rebound quickly because there is another match coming up,” she said. “So it builds that sense of confidence but also this mental strength where you’re really able to persevere through any challenges you might have. The physical work is really tough, but mental strength is one of the toughest things to achieve.”

Building that mental strength, she said, gave her the ability to learn from a loss – to go back to the practice room and work harder. And when she won a match – and she won many – it felt like achieving one of her biggest goals. 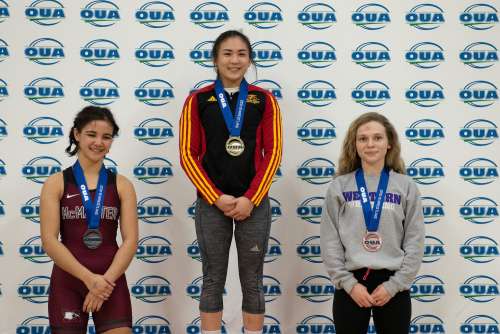 May is Asian Heritage Month in Canada, a time to celebrate and reflect on the contributions people from Asian communities have made to Canada’s diverse culture, and to work to eliminate anti-Asian racism in this country.

“I went to elementary school in Caledon and was the only Asian person in my classroom,” Lu said. “It hurts to say it, but I was embarrassed about my culture. I was bullied a little bit and made to feel embarrassed about the types of food I ate and afraid to speak my own Chinese language.”

Subtle acts of discrimination changed her behaviour and identity.

“For a large part of my childhood, I tried to fit into a predominantly western culture, and I didn’t appreciate my heritage.”

But her experience as an adult, particularly in the diverse community she found at U of G, made her appreciate her cultural identity and heritage.

“I think Asian Heritage Month is one of those events that helps people who aren’t Asian to recognize the achievements of Asian individuals in our communities. But for people like myself, who are first-generation Canadians, seeing other people celebrate your heritage lets you know that it’s something to be proud of.”