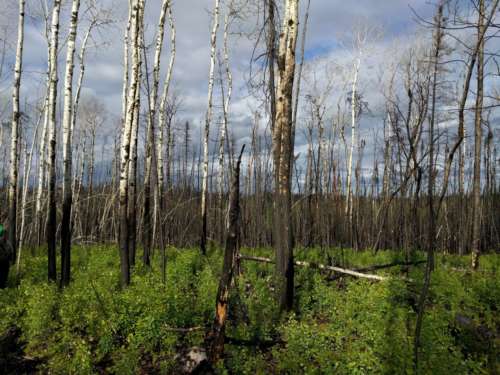 With summer wildfire season looming, a new study involving University of Guelph researchers has found that more frequent and severe fires in southern boreal forests of Canada under a warming climate are releasing large amounts of carbon into the atmosphere.

The study is one of the first to look at landscape and vegetation factors that drive fire dynamics in the southern boreal forest, and the first to compare wildfire activity and carbon release in southern and northern boreal regions, said lead author Catherine Dieleman, a research associate in the Department of Integrative Biology.

Although wildfire researchers have focused on more northerly blazes in the Northwest Territories and Alaska, fires in the southern boreal release plenty of atmospheric carbon and may hint at what’s in store for more frequent and intense burning under climate warming in the northern boreal forest, she said.

Published in Global Change Biology, the study was co-authored by researchers at U of G and the University of Saskatchewan as well as scientists in the United States and the Netherlands.

Researchers worry that more intense and frequent fires – along with timber harvesting – could turn boreal regions from carbon sinks to carbon sources, further exacerbating the effects of climate change. 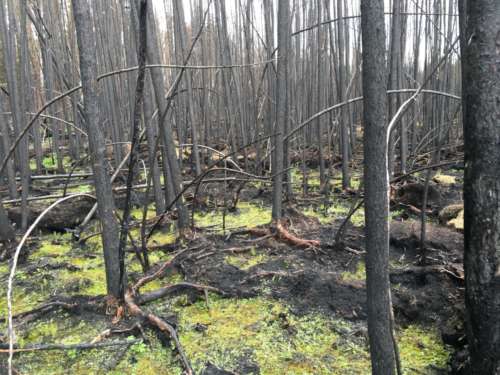 In Saskatchewan’s mega wildfire season of 2015, about 36 million metric tonnes of carbon were emitted, or about 112 million tonnes of CO2. With some 1.4 million hectares burnt, it was the province’s third-largest fire season on record, said Dieleman.

In 2016, the researchers measured carbon stocks and losses, tree ages and species, and geophysical features in the southern boreal forest of central Saskatchewan. They then looked at how those factors related to fire-carbon conditions.

More frequent wildfires change the structure of forests, leading to younger stands of trees on average. The researchers found that almost three-quarters of the southern boreal stands – dominated by black spruce and jack pine, with aspen and birch – are 70 years old or younger.

Northern boreal stands are typically one to two centuries old and hold much greater carbon stocks. Sprawling across North America and northern Eurasia, the boreal forest has historically been an important carbon reservoir.

Climate change is driving increases in the intensity, extent and frequency of fires, with deeper burning and higher combustion rates. In the northern boreal, more frequent fires under climate change are leading to higher carbon emissions to the atmosphere.

Fires and harvesting – both increasing in the boreal region – change the forest structure, including kinds of species and ages of stands. 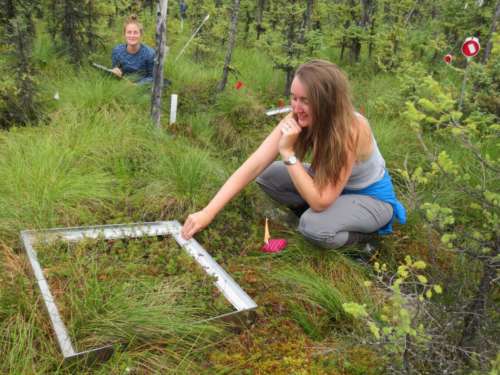 “Our study adds to a growing number of studies over the past decade indicating that the northern boreal is at high risk of losing its capacity to store as much carbon in the coming decades with a shift in fire intensity and frequency,” she said. “If the southern boreal analogue comes to fruition, it could indicate a dramatic shift in stand structure and a notable decline in carbon storage in the northern boreal.”

The study also looked at harvested sites that were regenerating before being engulfed by wildfires. Those sites often recover faster than normal and emit more carbon when they burn, said Dieleman.

She said managers need to understand the long-term effects of land use practices like harvesting in the boreal forest, particularly if they aim to mimic the carbon cycles of more naturalized systems.

“The high frequency burns and more intensive timber industry of the southern boreal provide a potential blueprint for the future of more northern stands in the coming decades. By comparing the two regions, we can understand how northern boreal forests may change and how that will affect carbon storage.”

The study was funded by the Natural Sciences and Engineering Research Council and the U.S. National Aeronautics and Space Administration’s Arctic Boreal Vulnerability Experiment.