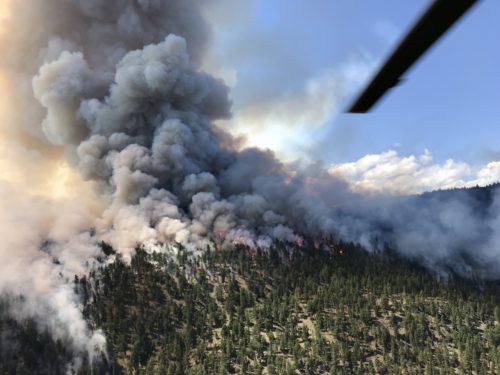 A wildfire in southern British Columbia is seen from a helicopter.

A University of Guelph grad leading the fight against wildfires in southern British Columbia is finding that his physics degree has come in handy.

In recent years, Bryce Moreira’s job as aviation specialist with the Kamloops Fire Centre has been intensely demanding, given the highly combustible conditions in B.C.’s forests. But Moreira, 29, says he is able to keep his cool in part because of the practical skills he learned studying physics at U of G.

“When I finished my degree and moved back to B.C., I was unsure of my next step,” said Moreira. “But because of my degree I was able to get a job with the BC Wildfire Service in the winter, a job that was directly applicable to physics.”

He oversees deployment of helicopters for transporting firefighters or dumping water on fires. 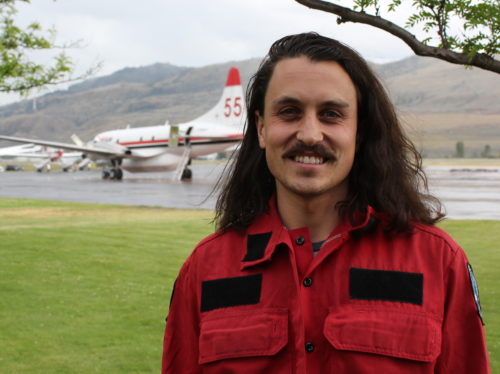 U of G physics grad Bryce Moreira puts his education toward fighting wildfires in B.C.

Depending on the size of the fire, the response can involve anywhere from one to 30 helicopters. While Moreira is not a pilot himself, he sometimes finds himself in the co-pilot’s seat hovering over a blaze.

Controlling a fire is exhausting, he said, but the sense of accomplishment is huge.

“It certainly can be a lot of pressure, but we all accept that pressure as part of the job we have,” he said. “I am looking for the best possible way to control and suppress the fire and to protect life and property. You have to take it one task at a time.”

His U of G education gave him a good foundation for understanding physics and its varied applications. His job mostly involves analysis and organization of complex and urgent firefighting strategies. The more fires burning, the more involved the strategy becomes. The skills in data analysis he learned at U of G have been indispensable in his work, he said.

The 2017 and 2018 fire seasons were the most extreme in the province’s history, burning more forest and forcing more evacuations than ever before. This year, conditions improved.

Moreira said the recent spike in the number and size of fires has been fuelled by climate change. Dry conditions caused by a lack of snowfall in winter and extreme temperatures in spring and summer are the major contributor, a perspective backed up in a recent study by Environment and Climate Change Canada. 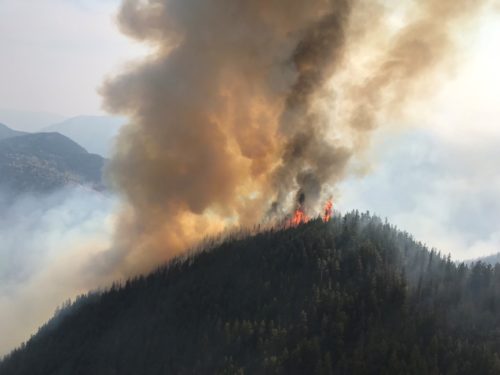 Extreme fire seasons are likely to become more common as global temperatures continue to rise, according to the study.

“There is so much math involved in a physics program, and math explains things in a very technical and rudimentary way,” he said. “It helps explain the principles of how things operate and gives you an appreciation for larger ideas based on these simple principles.”

Originally from British Columbia, Moreira completed his U of G degree in 2013. He spent summers in Kamloops working for the BC Wildfire Service, a job that he began while in high school. 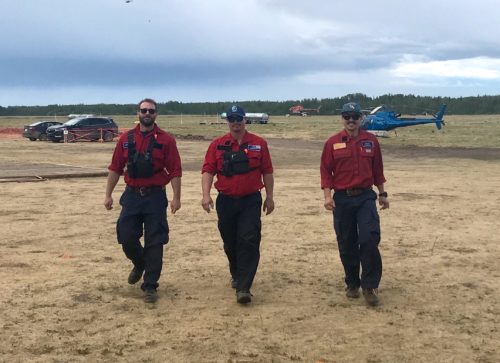 Kamloops Fire Centre crew with Moreira on the right

He gained hands-on experience fighting fires and landed a full-time job because of his ability to analyze data and solve problems.

“Being able to understand things from their basic principles and seeing the root cause helped me to solve unique problems that come up day-to-day in my work,” he said.

As a top high school volleyball player, Moreira competed for two years on the provincial team. He was an assistant coach on the Gryphons women’s volleyball team in 2012-13.

“Typically, I had a pretty good eye for technical skills,” said Moreira, who now coaches varsity volleyball in B.C. “I was able to add technical expertise and to support the whole team.”

With two record-breaking wildfire years in the province, recent fire seasons have been tough on crews and coordinators, he said. During time off, he gets rest and stays physically active to deal with the stress.

Moreira said it is difficult to witness the destruction wreaked on B.C.’s environment, but he credits his U of G education for his ability to focus on minimizing the damage.