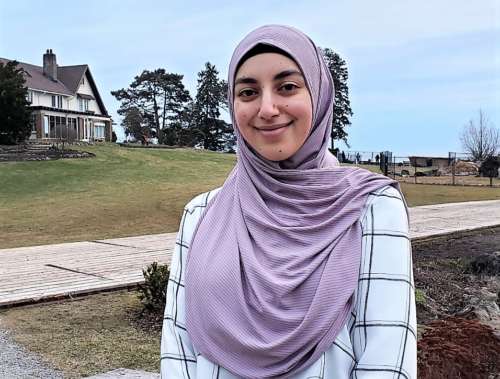 Shedding light on the experiences of Canadian adolescents who are members of visible religious minorities is the research goal of Danah Elsayed, a University of Guelph student who has been named a finalist in the annual SSHRC Storytellers Competition.

The competition, run by the Social Sciences and Humanities Research Council, challenges university students to explain in less than three minutes or 300 words how their social science research could help change lives.

Elsayed, a master’s student in family relations and human development, was selected for her video entry called “Wearing Your Beliefs on Your Sleeves.”

In the video, Elsayed explains that most research on the benefits of religious beliefs – such as its tendency to make believers engage in more pro-social behaviour – focuses on countries’ majority religions.

But how does religiosity affect members of a religious minority?

It could have negative impacts, particularly if they face discrimination or hatred, said Elsayed. But it could have positive impacts, too. It could, for example, help members of religious minorities develop a stronger sense of identity, making them more resilient to peer pressure.

Understanding these effects is what fascinates Elsayed, who is a visible Muslim woman herself.

“I have always been interested in how religiosity impacts the lives of minorities, as I myself am a member of a religious minority, and I wondered how many of my experiences could be generalized and how it might impact others differently,” she said.

Elsayed is particularly interested in understanding how religiosity shapes adolescents at a time when they are both searching for their own identity while feeling pressure to conform to social norms.

“I’m focusing on late adolescence because that is a particularly important time in the development of these things, and I want to know what can be done to make sure that minority youth are thriving,” she said.

Her work is particularly relevant given that the number of people in Canada who are members of visible religious minorities could double within 20 years.

“An important part of preparing for that future is understanding how something as salient as religiosity impacts people differently,” she said.

As one of 25 finalists for 2020, Elsayed will compete in the Storytellers Showcase at the 2021 Congress of the Humanities and Social Sciences to take place in spring 2021 at the University of Alberta.

“The richly deserved recognition of Danah as a SSHRC Storyteller is spectacular,” said Malcolm Campbell, vice president (research). “This award highlights the role of communications in improving life – something that Danah’s research and storytelling wonderfully exemplify.”

Elsayed’s research is funded in part by a SSHRC Joseph-Armand Bombardier Canadian Graduate scholarship, under the supervision of Prof. Lynda Ashbourne of the Department of Family Relations and Applied Nutrition.