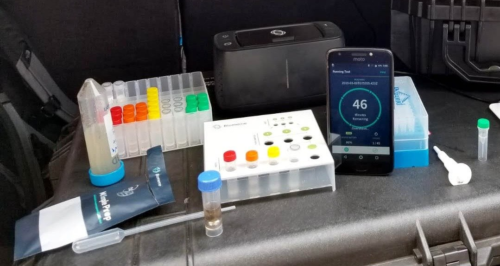 Rapid, portable COVID-19 testing, especially for underserved, remote areas such as Indigenous communities in northern Ontario, is the purpose of a new “lab in a briefcase” based on University of Guelph genomics technology.

The test was adapted by Precision Biomonitoring, a Guelph-based company named in late March among the first 10 candidate companies selected by Ottawa to provide detection technology for the novel coronavirus.

Called Go Strips, the testing platform is based on environmental DNA (eDNA) technology developed in U of G’s Biodiversity Institute of Ontario (BIO) and now licensed by the company.

He’s now awaiting Health Canada approval for use of Go Strips to help in testing for the coronavirus.

“We need to ensure that all Canadians are receiving access to necessary tools, especially communities that are most vulnerable,” said Thomas, former CEO of the University’s BIO. “Our rapid point-of-need solution is designed to do just that.”

CBC Kitchener-Waterloo recently featured the innovation in a report.

Weighing just over a kilogram and battery-operated, the detection instrument will be especially useful for screening vulnerable populations in point-of-need locations such as airports, borders and rural and remote locations, he said.

“It can be transported in a small briefcase or backpack to test vulnerable populations in remote areas with no access to a lab.”

The device can perform nine tests per hour and provide results in an hour. Existing tests in road-connected northern communities can take up to seven days and even longer in more remote areas.

The test kit analyzes patient samples for evidence of coronavirus genetic material. Normally, the company uses the same technology for environmental monitoring, such as detecting aquatic organisms from trace amounts of DNA in a water sample.

Since 2016, Precision Biomonitoring has developed molecular detection tools for environmental and food uses. The company provides on-site surveillance and identification of organisms for consulting firms as well as government agencies and resource companies.

When a board member asked whether the company could adapt a COVID-19 test, said Thomas, “We thought for about 10 seconds and decided to pivot and expand to the health-care market. We’re now an environmental, food and health-care company.”

Steve Crookes, head of development and a co-founder of Precision Biomonitoring, said, “With our capacity for on-site testing, it made perfect sense to make the technology available for detection of COVID-19 in remote communities.”

Earlier, Crookes worked as a U of G post-doc with integrative biology professor Robert Hanner, another company co-founder.

Hanner said, “My lab was instrumental in developing and testing environmental DNA assays on the mobile platform as a proof of concept that helped launch Precision Biomonitoring.”

Along with other U of G researchers, he now plans to explore other uses of the technology for monitoring COVID-19 in municipal wastewater and foods.