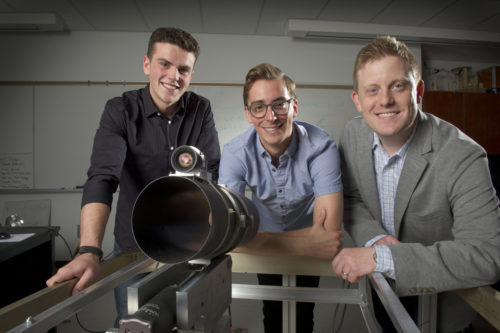 Shooting for the moon has paid off for University of Guelph engineers.

Working with a NASA team, the researchers helped design a first-ever moonlight tracking device that will ultimately improve the accuracy of numerous Earth-observing satellites monitoring everything from weather to vegetation cover to ocean temperatures.

In a series of test flights this month aboard a high-altitude plane, a U of G-made robotic telescope mount performed even better than NASA’s hoped-for accuracy targets. That makes the device a likely key component for ensuring performance of satellites used to detect large-scale weather patterns and signs of climate change on Earth, said engineering professor Andrew Gadsden.

“We wanted to use pure moonlight to calibrate sensors on satellites,” said Gadsden, who is co-principal investigator of an international research team that built the NASA-funded instrument. Referring to last week’s successful trials of his lab’s ARTEMIS (Autonomous Robotic Telescope Mount Instrument Subsystem) technology, he said, “NASA will have a model to do that.”

Consisting of a robotic mount, a camera and various controls for keeping a telescope trained on the moon during flight, ARTEMIS will help satellites calibrate their sensors by measuring the amount of sunlight reflected by the moon.

Satellite sensors degrade over time with exposure to high-energy particles and ultraviolet light. Those sensors need to be calibrated periodically by looking at a reference source and comparing how it appears with earlier glances.

As a stable source of reflected sunlight, the moon provides a handy calibration reference to check whether satellites are recording actual changes on Earth or alterations in their sensors.

“This technology gives Earth-orbiting satellites a reference point or baseline against which to compare their own measures to ensure the instruments they are using are accurate,” said master’s student Andrew Newton.

Imagine comparing the heights of two people, Newton said. “It’s easy to measure relative height next to someone else. But if those people are at a distance, you need an absolute reference like a ruler. The absolute reference for our project is the intensity of light reflected from the moon.”

U of G-made robotic telescope mount

Former master’s student Andrew Cataford designed and built the robotic mount in Gadsden’s Intelligent Control and Estimation lab on campus. ARTEMIS has a camera that scans the sky until it finds the moon and then directs the telescope to point at it, keeping it locked in place despite aircraft motion.

The telescope was designed by the U.S. National Institute of Standards and Technology (NIST).

Collectively called the airborne Lunar Spectral Irradiance Instrument (air-LUSI), the technology records data during flight and downloads that information to the ground.

The project received funding from NASA’s Earth Science Division and NIST. The team is led by Kevin Turpie, a professor at the University of Maryland, where Gadsden taught for several years before joining U of G’s School of Engineering in 2016.

Newton helped to fine-tune the instrument in Gadsden’s lab earlier this year. This fall, he travelled to NASA’s Armstrong Flight Research Center in California to help install the system in a converted spy plane.

The plane completed five nighttime flights at 70,000 feet – nearly twice as high as normal cruising altitude for passenger flights — to avoid most of the view-distorting effects of Earth’s atmosphere.

The instrument had to withstand direct exposure to the atmosphere, including temperatures as low as minus 54 Celsius.

Working in the mission control room, Newton analyzed the data to ensure that the system was working.

“It was entirely successful. We had great data for all five nights,” he said, adding that his highlight was riding in a chase car clocking 160 kilometres an hour down the airport runway to help stabilize the plane with its super-long wings during landings.

Newton said Earth-orbiting satellites might help refine models used to monitor and predict shifts in vegetation or ice over time, including effects of climate change.

Referring to the challenge of meeting NASA’s exacting engineering standards, Gadsden said, “It’s quite a design problem, and that’s a strength here in the School of Engineering.”