As hockey players work to impress their evaluators at NHL training camps this week, University of Guelph researchers have found a more accurate way for coaches to predict how quickly a player can accelerate on skates, even before they hit the ice.

In a first–of–its–kind study, researchers in U of G’s Human Performance Laboratory discovered resisted sprint tests better forecast how quickly a skater accelerates than traditional off-ice tests. This finding can help improve how professional hockey players are evaluated, said Dr. Jamie Burr, director of the lab and a professor in the Department of Human Health and Nutritional Sciences.

The study is published in The Journal of Strength and Conditioning Research.

“The resisted sprint most accurately predicts skating,” said Burr. “If used in combination with other approaches to testing off-ice, this could allow many players to be assessed quickly and accurately without the need for skates and ice.”

Acceleration is an essential skill in hockey and is often more important than maximum skating speed. Measuring off-ice acceleration is an important part of evaluating an elite player’s performance, whether it’s determining the effectiveness of their training program or assessing their skills leading up to the NHL draft, said Burr, who worked on the study with PhD student Kyle Thompson.

The researchers added resisted sprints with 15–kg and 30-kg weights off the ice. Athletes were tethered by a cable to a novel speed and acceleration training machine called a 1080 Sprint. Unwinding as the athlete runs from the stationary machine, the cable provides the appropriate resistance and registers speed and other measurements.

The results of these exercises were then compared to the results of non-resisted, on-ice acceleration. The researchers found off-ice resisted sprints accurately predicted on-ice sprint abilities.

Thompson said the device forces the athlete to maintain the leaning “accel position” needed for rapid skating. Surface contact time is similar in resisted sprints on ice and ground, he added.

“The closer you can get to the actual movement patterns and forces, the better the ability to predict the outcome,” said Burr. “While running is still not skating, it would appear that resisted running is one step closer.”

Although resisted sprints are commonly used for training in many sports, this is the first time they have been used to predict on-ice skating quality, said Burr. Coaches will now have scientific evidence that tracking resisted running performance is a valuable tool. 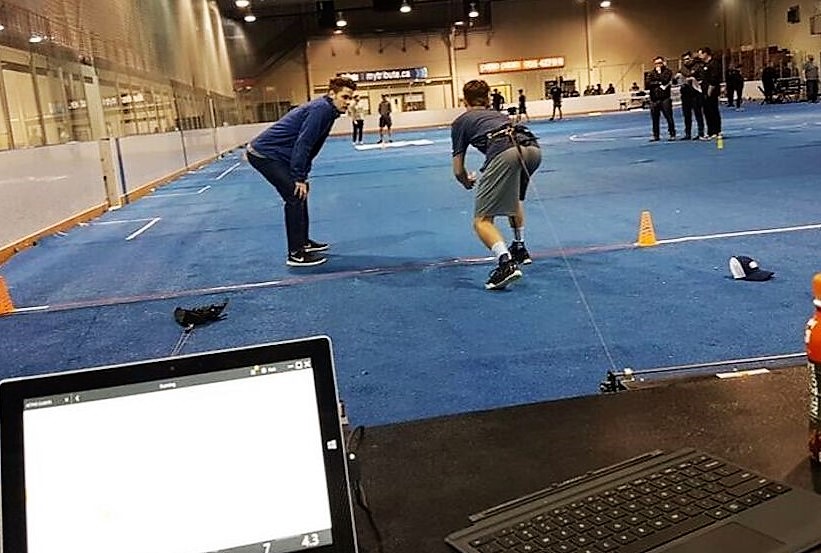 “The new technology we have access to – things like computer-controlled, robotic resistance machines – greatly improves our ability to control and measure these things.”

Burr said off-ice testing is commonly used to predict on-ice fitness and is used in team selections, including in the NHL.

Burr, who was involved in such testing for several years, said, “This new tweak on a running test helps us bridge the gap between physiological capacity and on-ice performance.”

This improved way of predicting a player’s on-ice acceleration can also help in assessing the success of off-season training programs, said Thompson.

“It would allow coaches to see whether a training program has helped a player’s on-ice acceleration without having to actually put them on the ice.”