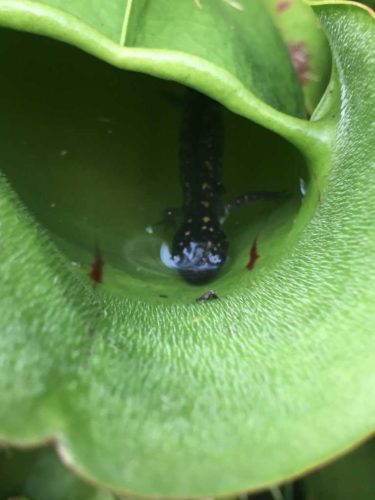 Call it the “Little Bog of Horrors.” In what is believed to be a first for North America, biologists at the University of Guelph have discovered that meat-eating pitcher plants in Ontario’s Algonquin Park wetlands consume not just bugs but also young salamanders.

In a paper published this week in the journal Ecology, the research team reports what integrative biologist Alex Smith calls the “unexpected and fascinating case of plants eating vertebrates in our backyard, in Algonquin Park.”

Pitcher plants growing in wetlands across Canada have long been known to eat creatures – mostly insects and spiders — that fall into their bell-shaped leaves and decompose in rainwater collected there.

But until now, no one had reported this salamander species caught by a pitcher plant in North America, including Canada’s oldest provincial park, a popular destination where the plants have been observed for hundreds of years.

Noting how long the park has held its secret – despite generations of visiting naturalists, its proximity to major cities and a highway running through its southern end – Smith said, “Algonquin Park is so important to so many people in Canada. Yet within the Highway 60 corridor, we’ve just had a first.”

In summer 2017, then undergraduate student Teskey Baldwin found a salamander trapped inside a pitcher plant during a U of G field ecology course in the provincial park. 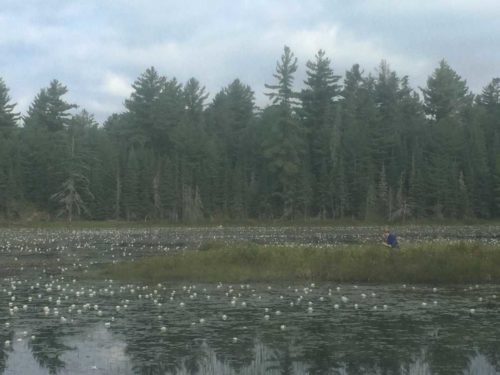 He’s a co-author on the new paper along with other researchers at U of G and the University of Toronto.

Monitoring pitcher plants around a single pond in the park in fall 2018, the team found almost one in five contained the juvenile amphibians, each about as long as a human finger. Several plants contained more than one captured salamander.

Those observations coincided with “pulses” of young salamanders crawling onto land after changing from their larval state in the pond. Smith said these bog ponds lack fish, making salamanders a key predator and prey species in food webs.

He said some of the animals may have fallen into the plants, perhaps attracted by insect prey. Others may have entered the plants to escape predators.

Some trapped salamanders died within three days, while others lived for up to 19 days.

Prey caught inside the plant’s specialized leaves is broken down by plant digestive enzymes and other organisms in the water held inside the leaf. Smith said other factors may kill salamanders in pitcher plants, including heat, starvation or infection by pathogens. 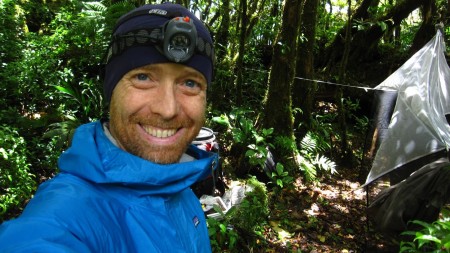 He said pitcher plants may have become carnivorous to gain nutrients, especially nitrogen, that are lacking in nutrient-poor bog soil.

Other flesh-eating plants grow in nutrient-poor environments around the world. They include sundews, which use their sticky leaves to catch insects, and the Venus flytrap, whose carnivory partly inspired the Seymour plant in the sci-fi musical Little Shop of Horrors.

Meat-eating pitcher plants have been known since the eighteenth century. One species discovered a decade ago in Asia consumes mostly insects and spiders but also captures small birds and mice. 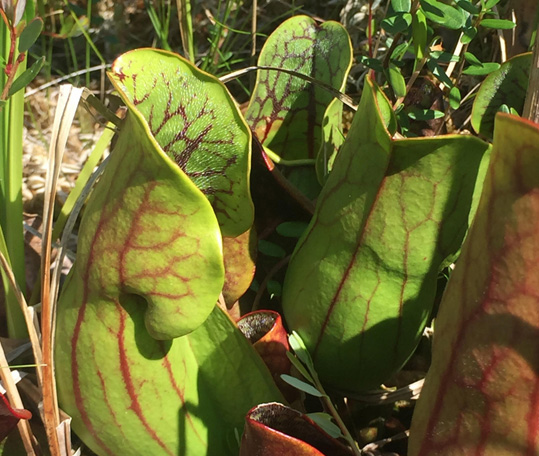 Smith said the Algonquin Park discovery opens new questions for biologists. Are salamanders an important prey source for pitcher plants? Are the plants important “predators” of the amphibians? Might the salamanders compete with plants for insect prey — and even “choke” the plant?

Tongue-in-cheek, he added that the find may also prompt park officials to rewrite interpretive materials. “I hope and imagine that one day the bog’s interpretive pamphlet for the general public will say, ‘Stay on the boardwalk and watch your children. Here be plants that eat vertebrates.’”