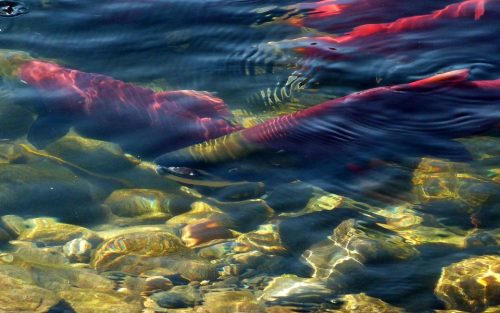 More than half of sockeye salmon exposed to crude oil in their egg stage end up dying even after they’ve hatched and escaped the contaminated waters, a new study from the University of Guelph and Simon Fraser University has found.

The study looked at immediate and subsequent effects of diluted bitumen – or “dilbit” – exposure on salmon eggs and found increased mortality, delayed hatching and developmental deformities.

The story was picked up by dozens of media outlets, including the National Post, CTV News, CBC News, Global News, and Yahoo News.

Dilbit is a major crude oil export produced in Canada’s oil sands and transported through the controversial Trans Mountain pipeline between Edmonton and Burnaby, B.C.

“After the exposed fish hatched, we put them into clean water and found again a higher mortality rate — even after the oil was removed – that reached 53 per cent in the highest exposure group,” said Prof. Sarah Alderman, an adjunct faculty member in U of G’s Department of Integrative Biology.

Alderman worked on the study with integrative biology professor Todd Gillis as well as Feng Lin and Christopher Kennedy from Simon Fraser University and Anthony Farrell from the University of British Columbia.

This is the final piece of research funded by a $432,000 grant from the federal Department of Fisheries and Oceans to investigate how dilbit exposure affects sockeye salmon physiology.

Earlier studies by the group showed that one-year-old sockeye exposed to dilbit had lower aerobic fitness and suffered heart and muscle damage. The Trans Mountain pipeline crosses the Fraser River watershed, which is Canada’s largest salmon-bearing watershed, meaning that a pipeline leak could harm these economically and culturally important fish, said Gillis.

Read the June 2017 study, “Proteomic analysis of sockeye salmon serum as a tool for biomarker discovery and a new insight into the sublethal toxicity of diluted bitumen

For the new study published in Aquatic Toxicology, the researchers exposed salmon embryos to concentrations of dilbit found in nature, and then followed the fish for eight months until their normal age for beginning their migration to the ocean.

They found that salmon exposed to dilbit while still inside the egg had a higher mortality rate.

After the fish hatched and were placed into fresh water, more than half died prematurely.

“They survived the initial exposure, were not exposed to oil any longer and 50 per cent of them died,” said Alderman. “This is huge.”

The researchers also found that dilbit-exposed eggs took longer to hatch. Hatched salmon from exposed eggs had more developmental deformities in their hearts and jawbones and had edema around the yolk sac.

The fish were also shorter and had a higher lipid content because they weren’t adequately feeding off the external yolk sack and converting it into body growth, said Alderman.

She also found the fish had enlarged brains.

“The brain is emerging as an important target of crude oil toxicity,” said Alderman. “Scientists are starting to see that crude oil is neurotoxic. It can have lasting effects on brain development and can impair future behaviours as well.”