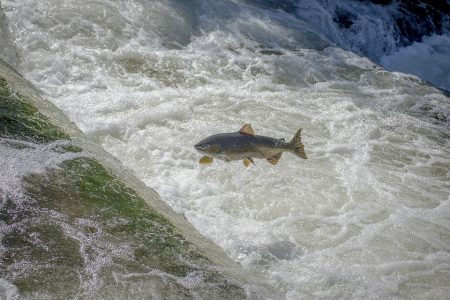 Amid continued controversy, Kinder Morgan is poised to break ground on its $7.4-billion Trans Mountain Expansion Project. When the pipeline is complete, it will triple the volume of diluted bitumen, or dilbit, that reaches Canada’s Pacific shoreline to 890,000 barrels per day.

The Trans Mountain pipeline has been in operation since 1953. It crosses numerous waterways as it snakes its way from Edmonton to Burnaby, B.C., including the lower portions of the Fraser River — North America’s primary salmon-producing river system. The pipeline expansion has raised concerns about how its failure might have an impact on these fish.

It is efficient and cost-effective to transport oil by pipeline, and leaks have been infrequent and usually small in Canada.

Yet catastrophes do occur.

Just ask residents of Marshall, Mich., about the 3.2 million litres of dilbit that contaminated the Kalamazoo River in July 2010 after an Enbridge pipeline failed.

Pacific salmon are deeply ingrained in the fabric of Canada. They are a key link between aquatic and terrestrial food chains, connecting marine algae to bears and forests. They are a central element in First Nations cultures and economies. And they generate more than $500 million in revenue annually through the combined activities of sport fishing, commercial harvest and tourism.

As a biologist, what fascinates me most about Pacific salmon is their remarkable life cycle.

Take sockeye, for example, an iconic and abundant species of Pacific salmon. Sockeye eggs develop slowly during the winter months, buried in the same gravelly river sediments once occupied by their ancestors. After hatching, they spend up to three years swimming through inland lakes before transforming into silvery, salt-tolerant fish that escape to the Pacific Ocean.

Years later they return by the millions for a single chance to spawn in their birthplace streams. Afterward, their bright red bodies decorate the riverbank, becoming a staple meal for bears and eagles, and an essential nutrient source for the forest ecosystem.

In recent years, the number of sockeye returning to spawn has decreased dramatically, and this is especially true for populations of the lower Fraser River. Many factors, like urbanization, have contributed to this decline, and it is clear that the survival of the salmon’s early life stages and its successful ocean migration are key to the long-term stability of Fraser River sockeye.

Understanding how a dilbit spill would affect sockeye during these early life stages can help prepare us for a future we hope won’t happen. 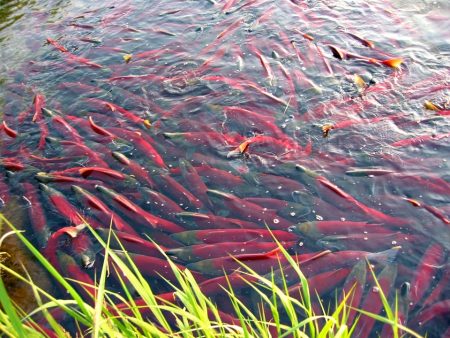 What is dilbit anyway?

Bitumen is Canada’s black gold. It is a heavy, viscous type of crude oil found in vast quantities in Canada’s oilsands. Extracted bitumen is blended with lighter hydrocarbons (diluents) to relax its tar-like consistency into a flowing liquid ready for transport. The blended products are called dilbit, short for diluted bitumen.

Diluting raw bitumen has another advantage besides allowing it to flow. It lowers the heavy oil’s density to below that of water, meaning that any dilbit released into the aquatic environment should float.

But the behaviour of spilled dilbit in water depends on many things, such as water flow and turbidity. Not to mention that the diluent evaporates rapidly, taking its added buoyancy with it. So the possibility that spilled dilbit will sink is a valid concern — and sunken dilbit is hard to clean up.

Four years after its spill in the Kalamazoo River, Enbridge was still dredging river sediments for sunken bitumen.

What would a spill mean for sockeye?

Like all crude oils, dilbit is a mixture of hundreds of chemicals, and we know that many of these are toxic to fish.

One consequence of crude oil exposure in developing fish is the damage it can cause to the heart. Much of this toxicity is blamed on a single class of chemicals in crude oils called polycyclic aromatic hydrocarbons, or PAHs for short. Fish embryos exposed to individual PAHs or to crude oil, at real-world concentrations, can develop heart deformities that affect cardiac function.

Often, and perhaps not unexpectedly, this cardiac toxicity can lead to reduced swimming performance. For a sockeye, that’s a scary thought. These aquatic athletes depend on their strong hearts to complete two rigorous migrations.

So how do we prepare for a “worst-case scenario” — a pipeline failure that contaminates sockeye habitat?

Using science to plan ahead

For the past four years, I have been working with experts in cardiovascular adaptations, oil toxicity and salmon physiology to build a comprehensive understanding of dilbit toxicity to early life stages of salmon. Our collaboration is part of an ongoing commitment by Fisheries and Oceans Canada to support research on environmental issues related to the oil and gas industry.

In controlled laboratory experiments, we expose salmon to low and environmentally relevant concentrations of dilbit over realistic exposure times. We test fish at a variety of early life stages and look for sublethal effects that might indirectly affect their survival.

So far, our research shows that spill-like exposure conditions can impair the swimming performance of juvenile fish by as much as 10 per cent and lead to pathological changes in heart tissue.

This is a big deal. It means that persistent dilbit contamination in a young salmon’s environment could conceivably reduce its chance of successfully migrating out to the ocean, and contribute to further population decline.

Our current work will determine if swimming performance can be recovered and if the heart pathology is reversible once the fish move to clean water.

We are also working toward developing blood biomarkers of dilbit exposure. Blood biomarkers are a valuable diagnostic tool, and could be used to monitor and manage the health of wild salmon following a spill.

All eyes are on Kinder Morgan now, but the Trans Mountain pipeline is just one branch in a transport network that delivers oilsands products across the continent. Like it or not, our world still runs on fossil fuels, and Canada’s vast bitumen reserves are a difficult resource to ignore.

But there is a silver lining to this story.

At the lowest concentrations we tested, and at the shortest exposure times, the salmon’s swimming performance was not impaired. A rapid response to contain a dilbit spill is therefore crucial to minimizing the effects on sockeye.

More importantly, the federal and provincial governments must rigorously enforce pipeline regulations to make sure that companies like Kinder Morgan build and maintain their pipelines to the highest standard.