It’s not only the baldness prevention and freckle remover formulas that are making copies of The Canadian Receipt Book fly off the shelves. The new volume, a facsimile of a very old, rare book discovered in the University of Guelph Library archives, also includes curatives for pig leprosy and inflammation of the haw, and more pudding recipes than you can shake a wooden spoon at.

The unique volume, like so many historical cookbooks, offers a window into how people lived in the past, says University of Guelph Library’s special collections librarian Melissa McAfee. Published – or, rather, republished – recently by Rock’s Mills Press in Oakville, Ont., the new edition of The Canadian Receipt Book resulted from a discovery during a U of G Library project on Canada 150 celebrations. The first printing of the book sold out quickly.

The book was discovered when food history instructor Rebecca Beausaert and a group of students created an archival exhibit on Canadian food history at U of G Library. McAfee and Archival and Special Collections staff collaborated with Beausaert and her students with the project. A search for a cookbook from 1867, the first year of the Canadian nation, brought to light what is believed to be the only surviving copy of the original volume, tucked away in the Una Abrahamson Collection.

The small book was published by the Ottawa Citizen back when recipes were known as receipts and most Canadians were an agricultural people.

“A lot of food historians are very interested in this book,” said McAfee. “Harvard University, which has a very extensive culinary collection, is delighted to see this reprinted.”

Likely the first cookbook published in the new nation of Canada, its subtitle promised “over 500 Valuable Receipts for the Farmer and the Housewife.” 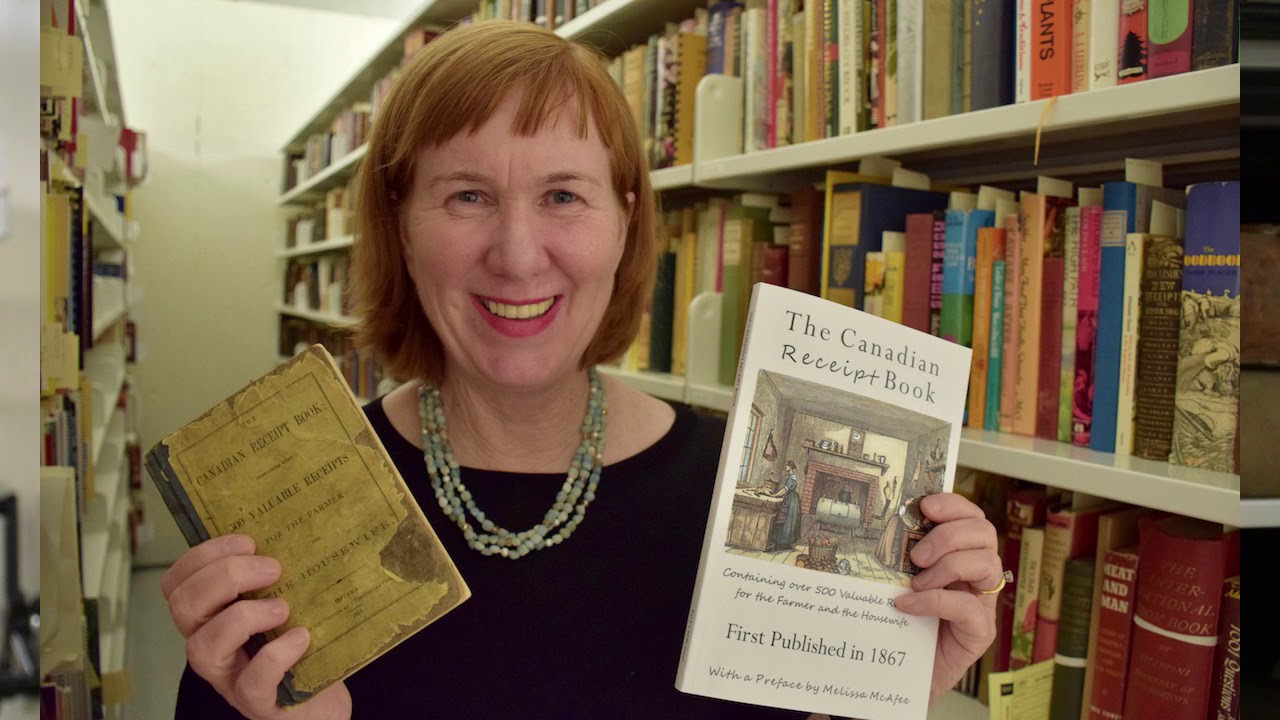 The many advertisements alone are a valuable source of information about business practices 150 years ago, McAfee said.

“One of the first things that caught my eye was the advertisements,” she said. “There is one for a dentist who uses an ‘ethereal spray’ so you won’t feel anything. And another for ‘a good assortment of English, French and German cloths, constantly on hand.’ These ads show what people were thinking about and what they wanted.”

At Confederation, most Canadians grew and raised their own food, made and mended their own clothes, nursed their own animals back to health and spent their earnings mostly on necessities.

If their horses had inflammation of the haw (eye) or a bout of wood evil from eating certain tasty but toxic tree buds, farm families turned to The Canadian Receipt Book for home remedies. It was their survival guide, McAfee said.  Some of those homemade pharmaceuticals were for human maladies. Well before it was an illegal narcotic, cocaine was used in a host of home remedies.

To “destroy offensive breath” a mixture of six to eight drops of chloride of soda in a glass of water, thoroughly gargled, would leave the mouth as fresh as could be. A firm-hold hair dressing could be made from an ounce of Irish moss (red algae) soaked in water with a dash of rectified spirit. And a tincture of powdered cantharides blended with a pound of beef marrow and scented with several drops of bergamot, was thought to prevent hair loss.

Jen Rubio, Rock’s Mills Press publisher, said publication of The Canadian Receipt Book follows on the highly successful reprinting of The Johnson Family Treasury: A Collection of Recipes and Remedies, 1741-1848. The original manuscript was also found in the Una Abrahamson Collection at U of G.

“There’s a big interest in culinary history nowadays,” she said. “People are eager to study foodways – the eating habits and practices of different people and historical periods – and how recipes made their way to different countries.”

The Canadian Receipt Book was designed with the farmer in mind, she added. “There are these hands-on things that only a farmer would have to deal with. It says something about what life in Canada in 1867 was actually like. We were an agrarian economy. We may have had aspirations to have British-style cooking, but we had the real problem of asthmatic chickens.”

Archives are an essential source of historical information, and archivists who are intimate with university collections are an indispensable link in the knowledge chain, pointing the curious in the right direction, Rubio added.

Holding the fragile original, McAfee said its rarity was confirmed by the Online Computer Library Center’s WorldCat, the world’s largest library catalogue. In preparation for publication, the original book was digitized page by page to make it more accessible.

The Canadian Receipt Book, Rudio said, has been getting lots of media attention, and is selling very well. It’s available at Rock’s Mills Press for $24.95 at http://www.rocksmills.com/canadian-receipt-book.html.