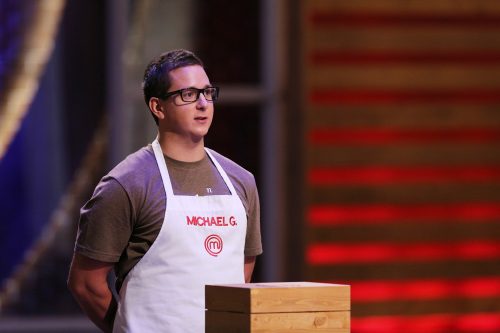 University of Guelph mathematics student Michael Griffiths is showing he has the right formula to excite the sophisticated taste buds of judges on the popular CTV television series MasterChef Canada.

Chosen from hundreds of cooks from across the country, the applied mathematics and statistics graduate student recently advanced to the show’s top 10. MasterChef Canada airs weekly on Tuesday, 9 p.m. EST, on CTV. Three of 12 episodes have been aired so far.

“I don’t think of food as just a necessity,” says Griffiths, who put his master of science studies on hold to pursue the cookery contest. “I grew up in a big family, and food was always at the centre of our household. No matter what we were doing, we would always come back and sit down for dinner.”

There is something mathematical about preparing a recipe, he said. But according to his calculations, food has a deeper meaning beyond taste and nourishment. Eating, especially in a social setting, is a “total experience” involving family, friends, superb craft and surprising tastes.

“What I’m trying to do is share an experience with someone that is centered around food. It might spark conversation or just straight-up wow your senses. In my household, we’ve been doing it my whole life. It just comes naturally.”

MasterChef is an intense, skill-testing cooking competition that challenges chefs to be well-rounded and brilliant in the culinary arts, and exceptional under pressure. Griffiths has consistently shown he can handle the heat of the kitchen. His family history and a small sibling challenge trained him well.
Over the years, his sister has played a kind of cooking game with him, sending one-word food ingredients and challenging her brother to use them in a dish. Michael has to think quickly, make something successfully delicious and report back.

While he never had ambitions to become a television personality, being a part of MasterChef Canada is spurring his drive to put food at the forefront of his life. It has been an exhilarating and inspiring experience, he says. He hopes he can inspire others to pursue what they love.

A kitchen is a thrilling place where both symmetry and experimentation commingle, says Griffiths.

“There are lots of things that are formula-driven in terms of procedure, logistics or organization. But when it comes to actually making something, I think that’s when the mad scientist really comes out and says, ‘What about this, try that, do this.’ I find that is so much fun.”

A great cook is someone who is driven to continually push the boundaries and discover new flavours, Griffiths added.

“Something that I pride myself in is trying to throw someone off the ball when I prepare food for them. I’m looking for that reaction where they say, ‘I just never tried that before.’”

At U of G – known as Canada’s food university — Griffiths, 24, is working toward a master’s degree in applied mathematics. He plans to continue his graduate studies and become a mathematician.

“I truly love mathematics and I don’t see any harm in having more than one love in life,” he says. “My education has such a strong connection to what I do in the kitchen and in life in general. My studies at the University of Guelph taught me discipline, taught me how to learn. My graduate classes tested me to do some of the hardest things I’ve ever done and pushed me to limits I didn’t even know I could achieve.”

A recipe is essentially mathematical, made up of values, measurements, proportions and ratios, he says.

“When cooks get into kitchens they are constantly evaluating, analyzing and critically thinking about their food. That, to me, is the science. It’s problem solving. The brain kicks in and says, ‘Let’s get thinking.’ It’s pushing the bounds and trying to find solutions for things we don’t have the answer for.”