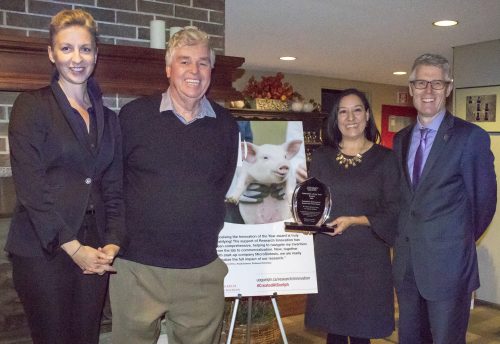 University of Guelph professor emeritus Mansel Griffiths, an expert in food safety, is this year’s winner of the University’s Innovation of the Year Award.

Griffiths received the honour for pioneering the use of probiotics to reduce the spread of harmful bacteria. The biopeptide technology he perfected over years of research at U of G helps the health of both humans and animals. Medical doctor Maira Medellin-Peña was also recognized for her contribution to the innovation.

The award program, which began in 2016, recognizes and celebrates U of G innovations with significant socioeconomic impacts in Canada and internationally. His innovation is already on the market in various forms.

“I am honoured to be selected from all the brilliant research that is being conducted at U of G,” said Griffiths.

Bacteria are part of complex biological communities, such as those common in the gastrointestinal tracts of humans and animals. Bacteria, especially the most virulent kinds, communicate with each other, accelerating growth and causing illness.

Griffiths found that blocking the chemical signals transmitted by these bacteria can prevent intestinal infections.

“Probiotic bacteria produce molecules, which we term proteobiotics, that prevent bacteria from communicating with each other,” Griffiths said. “The disruption of these communication systems results in the genes responsible for the virulence of pathogenic bacteria to be switched off, rendering them less harmful.”

Since 2010, Griffiths and U of G have partnered with the company MicroSintesis to commercialize the technology, which has now gone through two clinical trials. The company is developing its manufacturing process and has launched four products in the animal health field.

MicroSintesis estimates market applications of the technology are worth more than $12 billion. “MicroSintesis already has products on the market to promote the health of production and companion animals,” added Griffiths, who serves as the company’s chief scientific officer. “We have shown that proteobiotics reduce enteric infections in pigs and poultry and reduce incidence of diarrhea in dogs. Ultimately, we see this technology being used to reduce infectious diseases in humans.”

Malcolm Campbell, U of G vice-president (research), said making fundamental discoveries and shepherding them for use in the wider world are key components of U of G’s mandate to improve life locally, nationally and internationally.

“At U of G, we take great pride in converting leading-edge research into real-world benefits,” said Campbell.

“The work of Professor Griffiths is an example of what the University stands for and demonstrates the vital importance of the research we conduct. The innovation he has achieved through persistent and tireless investigation is one that undoubtedly has the potential to improve life – whether by enhancing the life of farm animals or improving the general well-being of the human population.”

Hannah McIver, CEO of MicroSintesis, said the Innovation of the Year Award acknowledges the extensive work that has gone into the technology and its great potential.

“As a company, we are incredibly proud that Dr. Griffiths has been selected for the award,” said McIver. “What he discovered is a new way that probiotics work, and that is through the production of newly identified molecules that work by an anti-virulent mode of action. With this technology, we can improve probiotics, making them much more clinically effective.”

Griffiths joined U of G in 1990 as the Dairy Farmers of Ontario/NSERC Industrial Research Chair in Dairy Microbiology in the Department of Food Science.

Founding director of the Canadian Research Institute for Food Safety at U of G, he has edited numerous international journals and four books and authored more than 300 peer-reviewed publications.