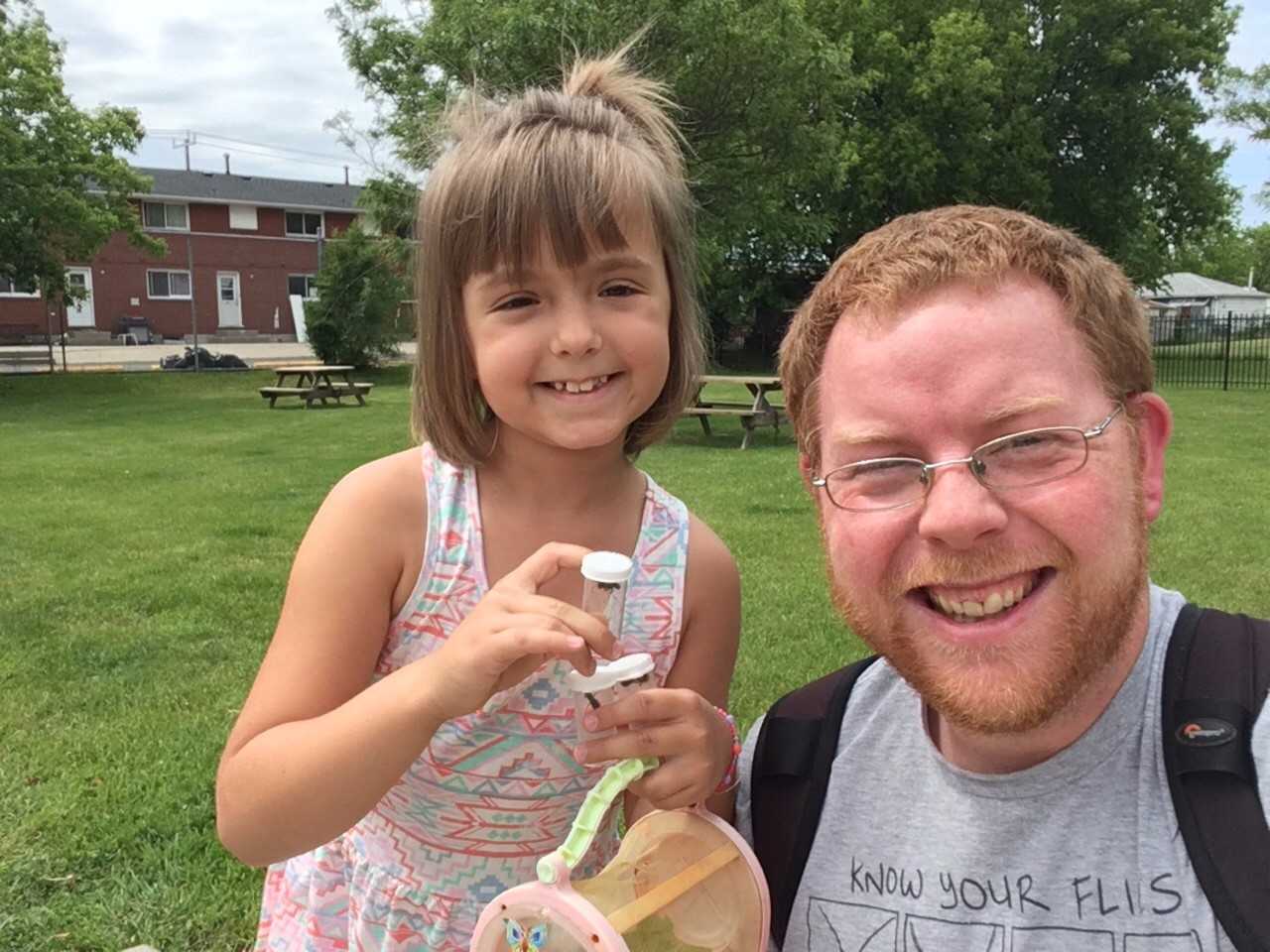 Sophia Spencer is a little girl with a big love for the study of bugs.

But when her appreciation for insects and all things entomological got her bullied by her school peers, it set in motion a series of events that have now brought the eight-year-old international attention and encouragement, and a credit along with a University of Guelph researcher as a co-author and subject of a new journal article.

Spencer and Morgan Jackson, a PhD candidate in the School of Environmental Sciences and an entomologist with the U of G Insect Collection, co-wrote Engaging for a Good Cause: Sophia’s Story and Why #BugsR4Girls, published this month in the Annals of the Entomological Society of America. It is currently one of the most read papers on the publication’s website.

“A paper about a viral experience is itself going viral,” Jackson says. “That’s a little strange.”

The article, based on Sophia’s personal story, explores the dramatic level of engagement that swarmed around the #BugsR4Girls Twitter hashtag in 2016.

“Sophia is a very enthusiastic young girl who really likes bugs, and who is fun and full of joy,” says Jackson, who met Spencer this summer and collected a few bugs with her. He completely understands her love of insects.

“Bugs are animals,” he says. “They are a lot more approachable for kids, because they can find them in their own back yards, pick them up in their hands, or put them in a little jar and look at them. They really start to examine them and let their curiosity flow through them.”

Sophia’s enthusiasm for insects involves all of those things and more. She can often be seen with her latest bug buddy riding on her shoulder or head.

In the paper, Spencer wrote that her “best bug friend” was a grasshopper she called Hoppers. She was a little scared of the insect initially, but soon had it drinking droplets of water from her finger.

“I really like being a bug expert, but a lot of kids at school, they’re killing grasshoppers, especially the big kids at my school,” she wrote.

After Sophia was bullied last year for befriending caterpillars, grasshoppers and insects of all sorts, her mother sent out a cry for help.

Nicole Spencer wrote an email to the Entomological Society of Canada looking for an insect expert who could encourage her daughter’s interest, act as a kind of pen pal for the girl and boost her spirits. The email was passed on to Jackson, the society’s social media coordinator.

Thinking he could generate more interest and support for Sophia through Twitter, Jackson tweeted to the entomological universe: “A young girl who loves insects is being bullied & needs our support.”

That tweet had a reach of more than 175,000 Twitter users, attracted dozens of offers to become the girl’s pen pal, and sparked numerous calls for the advancement of girls and women not only in entomology but also in science, technology, engineering and mathematics.

All the attention she received from the Twitter flurry made Sophia a bit of a celebrity in her hometown of Alexandria, Ont.

“Now that the hashtag went viral, and she is a published entomologist, bugs are the new cool thing,” Jackson says, adding that he was gratified to experience the positive power of social media. “I was really proud of the entomology community and the scientific community that reached out to support her when she was having trouble.”