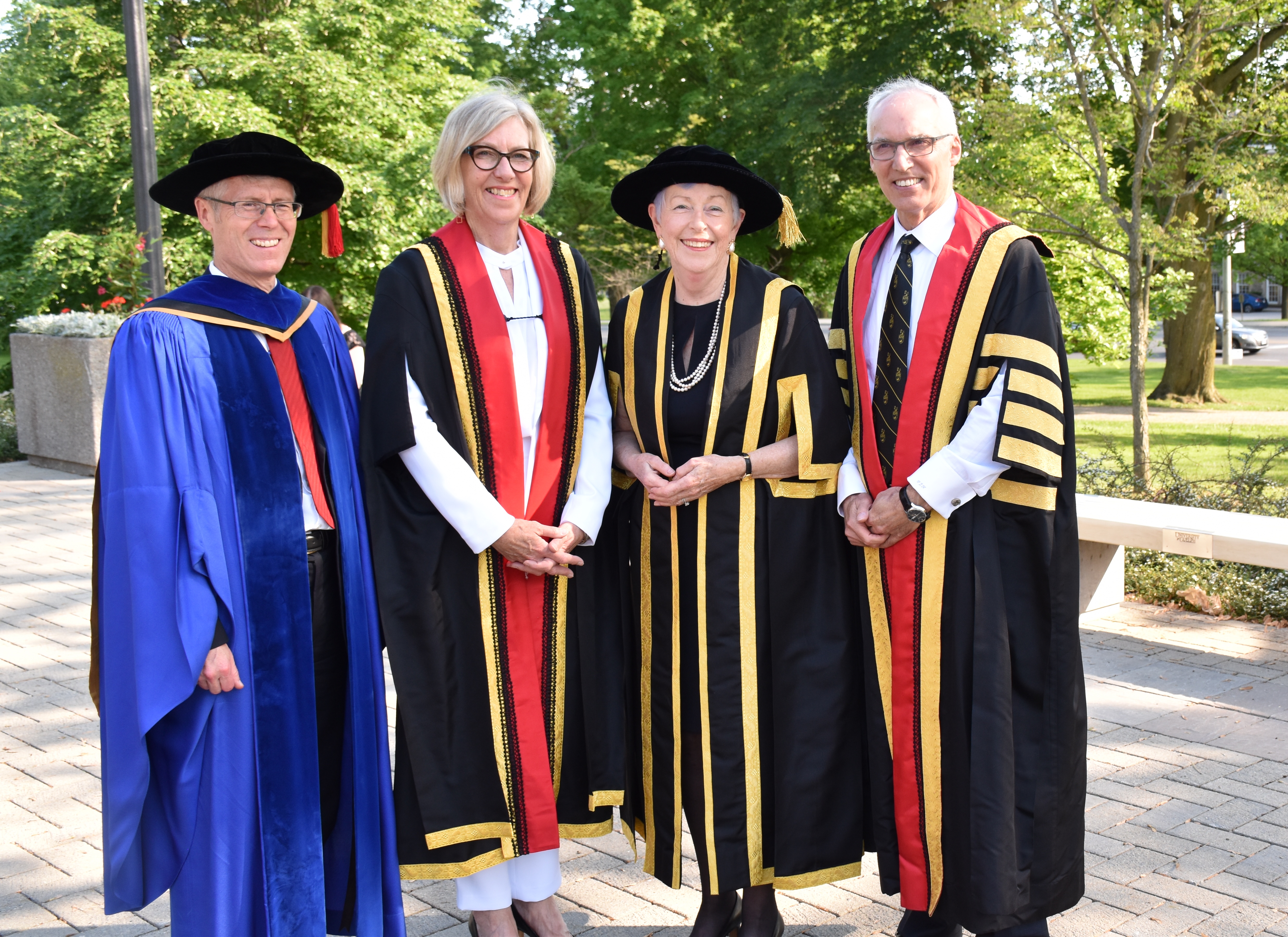 U of G chancellor Martha Billes (second from right) is joined by (l-r) U of G vice-presidents Malcolm Campbell and Charlotte Yates, and president Franco Vaccarino

For the first time in its history, the University of Guelph will have one of its own graduates serving as its chancellor.

Martha Billes, the controlling shareholder of Canadian Tire Corp. (CTC) Ltd., was installed today as U of G’s ninth chancellor. The Canadian business icon and well-known philanthropist is a 1963 graduate of the Macdonald Institute, one of U of G’s founding colleges.

Billes has called her years at U of G “transformational” and has been a strong supporter of the University for decades; U of G awarded her an honorary degree in 2013.

During her installation address today, she reflected on U of G’s role in her life and discussed how she will represent her alma mater as chancellor.

Billes recalled her days as a “Mac girl” and acknowledged former classmates among her audience.

“It was at Mac that our world broadened,” she said, adding that her professors fostered a desire to learn “but more importantly, they were always pulling us forward and inspiring us to look way, way ahead.” 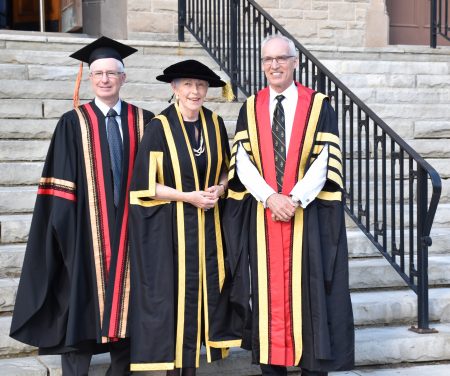 Billes recalled then-dean Margaret McCready’s saying that “Mac girls can do anything.”

“That line really stuck with me after graduation,” Billes said.

As the only daughter of A.J. Billes, Canadian Tire’s co-founder, there wasn’t room for her in the family business in the early 1960s “unless I wanted to be three stories below street grade in the employee cafeteria – working in a windowless concrete shell. No way!”

Instead of heading to the basement, she worked in research and development with Lever Brothers and with the Ontario Research Foundation before acquiring her teaching credentials and teaching in Toronto and Ottawa.

She joined the board of Canadian Tire in 1980, taking up her father’s seat, which he gave up specifically to make a place for her.

Three years later, she and her two brothers acquired control of the company through the purchase of shares held by the estate of her uncle, J.W. Billes. In 1997, she acquired her brothers’ shares to become sole controlling shareholder.

“Life is pretty amazing, isn’t it? I did finally join Canadian Tire, and when I did, I entered upstairs, in the corporate boardroom,” Billes said.

Pursuing interests in reform and good governance, she created a social responsibility committee and launched the charitable foundation Jumpstart. That foundation has raised more than $135 million and helped more than 1.4 million kids.

Employing more than 73,000 people, Canadian Tire ranks as having one of “Canada’s Most Respected Cultures,” with its brand and reputation among its most respected assets.

“Margaret McCready was right,” said Billes. “Mac girls really could do anything.”

At her installation, she encouraged students to embrace their university experience, tap into the power of education and use their knowledge to improve life for themselves and others.

“As chancellor, I am proud to accept the challenge and the opportunity to become an ambassador and to tell the story of the University of Guelph to the world.”

Billes was installed by president Franco Vaccarino during a ceremony in War Memorial Hall.

Vaccarino praised Billes’s “enthusiastic support” of U of G, and said her generosity and stewardship make her an excellent choice as chancellor.

“This is a University with a long and strong tradition of making a meaningful contribution to society, and Martha Billes has a passion for helping others and for inspiring hope and change.”

Billes is the third woman to hold the position since the University was established in 1964.

As chancellor, she will preside at convocations, confer all University degrees and act as an ambassador.

As the University’s senior volunteer, she will represent its interests to all government levels. The chancellor is also an ex-officio voting member of the University’s Senate and the Board of Governors.