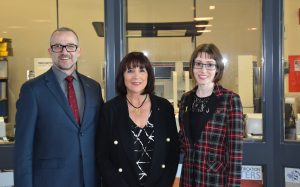 A $1.4-million gift to the University of Guelph to set up a lab for improving diagnostic testing and treatment of Lyme disease received national media attention this week with stories appearing in the Toronto Star, CityNews, CTV and CBC.

The grant was given by the non-profit G. Magnotta Foundation for Vector-Borne Disease, created in memory of Gabe Magnotta. The co-founder of Magnotta Winery died from Lyme disease in 2009.

The foundation aims to establish Canada’s first research centre for vector-borne illnesses; the Lyme disease lab at U of G is the first step. U of G scientists hope to identify disease biomarkers and prognostic indicators for Lyme disease, as well as new treatment options. The lab will operate within the College of Biological Science (CBS) under the direction of Melanie Wills.