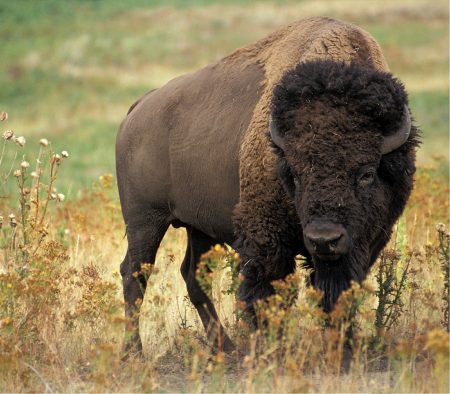 There’s safety in numbers for herd animals, but not if some members of the herd make poor decisions. That was one of the findings of research by  U of G integrative biology professor John Fryxell and U of G graduate Daniel Fortin, now a biology professor at Université Laval.

They studied the movement patterns of bison in Prince Albert National Park in Saskatchewan and found that those animals that ventured outside the park into neighbouring farmland were hunted, which contributed to the herd’s population decline over a nine-year period from 2005 to 2013.

When bison kept in paddocks in the park were allowed to roam free, that freedom came with unexpected consequences, says Fryxell. Their population size initially grew as they discovered new grasslands, but when they ventured into farmland adjacent to the park, they were often shot. Three times more bison were killed by hunters on agricultural land than died of natural causes inside the park.

“The bison developed a preference for plants in adjacent areas,” he says, adding that the same crops that appeal to humans also attract bison. “The decline was unexpected. The pattern of discovery of new pastures coincides with bison population decline.”

He compares the herd’s collective behaviour to “mob mentality.” As rogue bison left the herd to explore greener pastures, others followed the leader. Although being part of a herd offers benefits such as protection from predators, in this case the herd was being led into danger.

“As these individuals sampled agricultural lands, they were exposed to new selective pressures,” such as hunting, says Fryxell. “Animals, like humans, are very suggestible. That sometimes works to their detriment.”

Instead of losing members of the herd to natural predators such as wolves, which often target young, old and sickly animals, healthy adult bison were being targeted by farmers who shot any animal that ventured onto their property. “Mortality rates skyrocketed after an initial period of increase,” he explains.

Before humans began altering the landscape, animals could roam freely without the risks associated with human encounters. Now that people live on the outskirts of the park, any bison that venture past the park’s perimeter are unknowingly putting themselves at risk.

“When animals are unwittingly attracted to something that’s not good for them, we call that an ecological trap,” says Fryxell. While animals’ instincts drive them to keep searching for new food sources, their explorative nature could lead them into dangerous territory.

Fences aren’t the answer, he adds, especially for herd animals such as bison, whose survival depends on constantly finding the best grazing areas. If they stay in one place for too long, the land won’t be able to sustain them and they’ll starve.

“Being able to move is a benefit to the resources they’re feeding on and the animals feeding on them,” says Fryxell.

He also studies the impact of man-made barriers such as fences, roads and pipelines on animal movement patterns. He is currently studying the effect of these barriers on caribou in northern Ontario, reindeer in Norway, and gazelles and wildebeest in Africa’s Serengeti.

“How do barriers change the pattern of behaviour and alter their natural ability to explore their environment and find places that offer the best opportunities?” says Fryxell.

The herds of caribou he is studying in northern Ontario are surrounded by man-made barriers. Caribou rarely cross roads, even quiet ones, and often stay several kilometres away, he says.

“They act much more as a barrier than we think.”