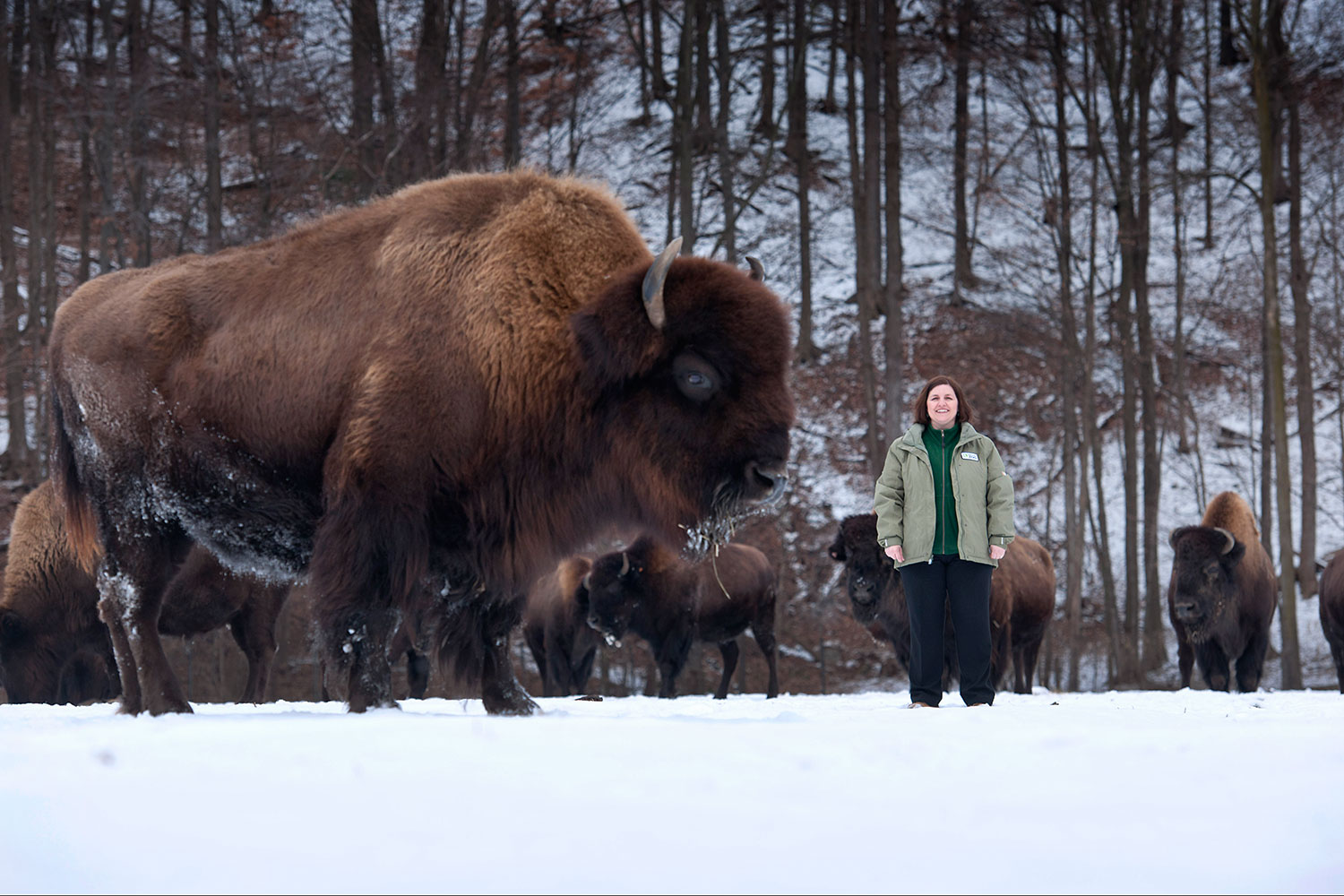 The iconic bison may not have the allure of some other endangered species, but their survival is just as critical.

As curator of reproductive programs and research at the Toronto Zoo, Gabriela Mastromonaco frequently works with exotic species, including pandas, tigers and rhinos. She says there’s lots of interest in working with these species because they are very high profile. But preserving Canada’s domestic species is a priority for her.

“Perhaps they are less spectacular, perhaps they are just cows, but Canadian species are at the forefront of my efforts,” says Mastromonaco, an adjunct professor in Biomedical Sciences at the Ontario Veterinary College (OVC).

Leading the only team in Canada doing reproductive technologies at a zoo, Mastromonaco is committed to finding ways to preserve species such as the wood bison. She joined the Toronto Zoo in 2007 after completing her PhD at the University of Guelph in 2006 with Prof. Allan King, Biomedical Sciences.

Mastromonaco continues to work closely with OVC scientists to develop technologies and devise strategies to maintain healthy populations of wood bison, in particular embryo production and genome banking of the species. In her second round of Natural Sciences and Engineering Research Council (NSERC) funding for this research, she channels those dollars to fund graduate students and research devoted to further reproductive technologies for this endangered species.

One of Canada’s indigenous species in the far North, wood bison are endangered due to disease and declining habitat. While they once numbered in the hundreds of thousands, now the wild herd in the Northwest Territories and Alberta is closer to 3,500.

Canada is considered free of tuberculosis and brucellosis in cattle, but these diseases still affect more than half of the wild wood bison herds. “This affects reproduction and their long-term survival,” says Mastromonaco. “They may die before they have offspring or their offspring may die.”

The research is ambitious and ongoing. “It’s a big umbrella program and there are two sides to it,” she says. Through the Toronto Zoo, Mastromonaco works with Parks Canada and the University of Saskatchewan on a bison preservation research collaboration. “There is a very practical or applied component where we’re trying to improve basic techniques like artificial insemination and embryo transfer.”

Her work with OVC focuses more on in vitro embryo production and genome banking of the species. “Because bison is considered an endangered species we are also preserving cells to maintain as much genetic material as possible for the future,” says Mastromonaco. This includes freezing sperm, eggs, embryos and skin cells. “We’re banking everything we can today because, for most species, we are losing animals faster than we can reproduce them,” she adds.

Mastromonaco’s research analyzes basic steps in bison embryo development to try to ensure the cells frozen today will result in healthy embryos in the future. While many of these techniques are well established in domestic cattle, research is still required for success in species such as bison.

“When you get down to 3,500 in a species, it is very precarious. They may be here in 20 years and they may not be,” she says. “If we lose bison, what’s going to happen to the wolves? Everything is linked out there.”