For just the third time in school history, the Ontario University Athletics (OUA) Female Coach of the Year is a Guelph Gryphon. 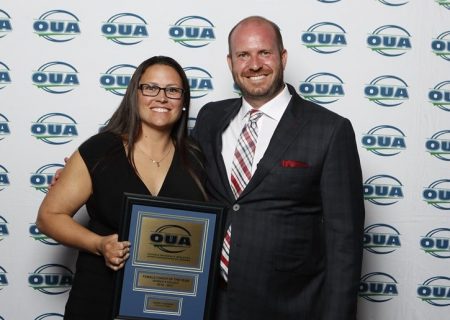 Flanagan joins Angela Orton (2004-05 women’s basketball) and Linda Melnick (2002-03 women’s volleyball) as the only female coaches in U of G history to take home the conference-wide honour, presented each year since 1998.

“I am extremely honoured to accept this award on behalf of the outstanding student athletes and coaches who I have the privilege of working with every day,” said Flanagan. “With such a young squad this past season, we knew that it would be up to the vets on our team to step up their leadership, and they did just that.”

“For Rachel to take home an award like this, in a conference full of outstanding female coaches from so many different sports, it’s really an incredible accomplishment,” said Scott McRoberts, U of G athletics director.

“While our women’s hockey team has achieved some phenomenal things on the ice, Rachel has also done a tremendous job throughout her time here instilling core values in her student athletes to set them up for success away from the rink as well.”

The 2016-17 season marked Flanagan’s tenth season as head coach of the women’s hockey program at the University of Guelph. During her tenure, the Gryphons have won 189 games, lost 54 and tied 15. The team has won two OUA titles during the past decade and qualified for nationals in each of the past three seasons.