U of G Athletes Excel at Recent Competitions

University of Guelph athletes have excelled in recent days, reaching the podium numerous times in track and field, winning national wrestling medals and advancing in playoff competition in men’s hockey.

Among the gold medallists were Sadie-Jane Hickson in the women’s 1,000-metre run, Tamia Noel in women’s shot put, Geoff Eyjolfsson in men’s heptathlon and Benayo Olak in men’s high jump.

“I don’t think you can say enough about the character and resilience that this team has shown,” he said. “You don’t make it through the year we’ve had and perform like this without a lot of incredible people leading the charge: student-athletes, coaches, support staff, medical staff, administrative staff.”

The Gryphons will compete in U Sports track and field championships March 5 at the University of Alberta. 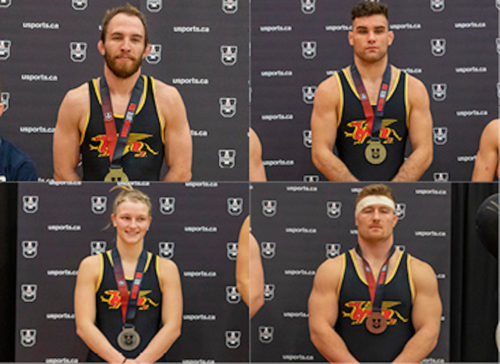 The men’s hockey team will play in the OUA West final for the second straight year after defeating the Brock Badgers in a 2-1 overtime victory Friday. Centre Luke Kutkevicius scored the winning goal. The Gryphons swept the playoff series in two straight games.

The women’s hockey team lost 2-1 against the Toronto Varsity Blues at Gryphon Centre, ending their season. Toronto advances to the semi-finals in OUA playoffs.

Six Gryphons represented U of G at U Sports swimming championships held Feb. 20-22 in Victoria, B.C.

Sam Kuntz qualified for the ‘A’ finals in the men’s backstroke, finishing his varsity season ranked 8th in the country. Shania Van Herk won the ‘B’ final in the women’s 50-metre backstroke, making her the 9th-ranked swimmer nationally in the category.