A University of Guelph graduate has been selected as the top co-op student in Canada. It’s the second time a U of G student has won the award, and the first since 1998.

Brianna Guild was announced today as the winner of the 2016 Canadian Association for Co-operative Education (CAFCE) Student of the Year Award, taking home a $500 prize. 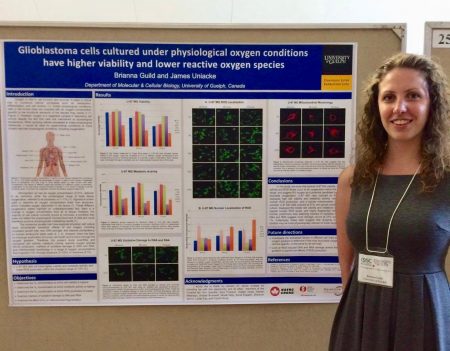 She also wins the $500 Emery-Dufault Award, named after two of the “founding fathers” of co-operative education in Canada, Charles Emery and George Dufault.

Guild, who graduated with a degree in biochemistry from U of G earlier this year, was selected for her work as a research assistant with Prof. Jim Uniacke, Department of Molecular and Cellular Biology. She characterized the response of human cells to culturing in physiological oxygen conditions.

“It feels a bit surreal to think that I was chosen,” said Guild, who is now completing a contract in Uniacke’s lab for the first half of 2017.

“Canada has so many co-op students doing such great things, so being chosen was not something I anticipated. It’s really exciting and a good feeling to have my work recognized.”

Guild first won the U of G award for Co-op Student of the Year for Science and Engineering, and was then nominated by the U of G’s Co-operative Education and Career Services (CECS) for the CAFCE prize.

She says working with Uniacke and PhD candidate Sara Timpano challenged her and gave her valuable skills.

“This is very fascinating research no one else is doing, and Jim’s a great supervisor. He pushes you to excel and take new opportunities,” she said.

In his nomination letter, Uniacke wrote that Guild’s lab expertise, research abilities and technical skills made her a key contributor to his work.

“Brianna has improved morale and work ethic within our team through her leadership and positive energy. She is as well-rounded an undergraduate as I have seen,” he wrote.

Guild said her classes at U of G helped prepare her to be part of a high-performing lab.

“I chose U of G because of the co-op program, but coming from high school, I knew little about biochemistry. My classes helped prepare me for the lab, and co-op gave me great work experiences,” said Guild, who is applying to master’s programs for speech-language pathology.

Jill Ferguson, acting director of CECS, said Guild is a great example of the success students can achieve by choosing a co-op program.

“For co-op students, we offer a 12-week non-credit course, as well as ongoing one-on-one coaching and support to help students prepare for the process, job search readiness and work term success,” she said.

“We also work closely with employers, such as conducting work term site visits to ensure a positive and enriching experience that complements the learning goals of the student’s degree program.”