Health researchers studying anything from Parkinson’s disease and cancer to stroke and heart disease might need to rethink their understanding of cell biology, say researchers at the University of Guelph.

The team found that cells produce proteins under low oxygen levels in significantly different ways than classic examples based on artificial lab studies.

Their findings could significantly affect the study of diseases, said Prof. Jim Uniacke, Department of Molecular and Cellular Biology. 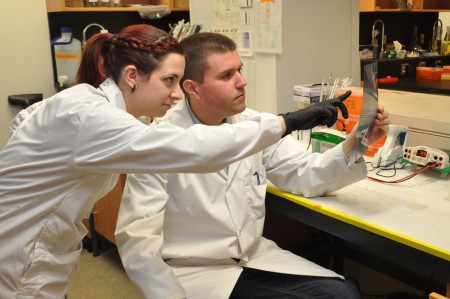 Sara Timpano and Prof. Jim Uniacke in the lab

The paper follows an earlier study that found laboratory cell culture performed in ambient air with 21 per cent oxygen is far from real-life. Cells in the human body receive only three to 12 per cent oxygen.

“That got us thinking that much of what we study in lab cell culture models may not accurately reflect human physiology,” said Uniacke.

“Understanding how cells respond to hypoxia — low levels of oxygen — is very relevant to people studying normal human processes as well as diseases. This could affect every cellular and molecular biology textbook that has been written.”

Uniacke’s lab focuses on protein synthesis. They found a number of instances where changing oxygen levels altered the long-accepted mechanisms behind how proteins are made in cells.

For instance, they examined RNA’s role in guiding production of proteins.

“What we found is that changing the levels of oxygen, similar to how oxygen levels will change in a body, leads to a combination of complementary mechanisms for creating proteins. This is a much more intricate way of expressing our genes from DNA to protein than what was previously thought,” said Uniacke.

The team’s findings might help in understanding other aspects of cell biology, said lead author and doctoral student Sara Timpano.

“The differences found here would seem to suggest there will be different findings for other researchers also,” she said.

“Cells should be cultured in an accurate physiological oxygen setting if we want to get results that are applicable and relevant.”

The findings were published in the March 21 issue of the Journal of Biological Chemistry.