University of Guelph student Alexandra Chandler had long known about her Toronto family’s connection to the Holocaust. But when she was helping to organize last week’s commemorative events on the U of G campus, she had no idea how close to home things would come for her paternal grandfather, Howard Chandler, now 87 and a Holocaust survivor.

Alexandra and other students had a replica cattle car delivered to campus for Holocaust Education Week. Inside, they displayed photos and information posters reprinted from national archives. They also arranged for Holocaust survivor Bill Glied of Toronto to speak last Thursday evening. 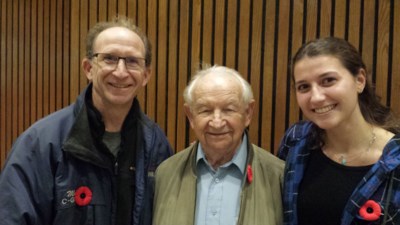 (l-r) Mark, Howard and Alexandra Chandler during Holocaust Education Week at the University of Guelph. Photo by Andrew Vowles for GuelphToday.

Chandler’s parents, Iris and Mark, came in from Toronto with Mark’s father to hear the talk. Arriving early, they looked into the cattle car. Even before climbing inside, Iris was weeping. “When I saw it, I was overcome with emotion. I couldn’t control myself, it was just too much,” she says.

There was more inside. At one end of the car, Howard pointed to a photo taken near the end of the war in Theresienstadt in German-occupied Czechoslovakia. The image shows a Nazi freight train wagon with dozens of boys clustered above its open top. “I was on that train,” he says.

Recalling the moment last week when he talked to other people who had come to see the rail car, Mark  says, “I was emotional. I had tears in my eyes. My dad is (talking to) these people in the train car as a person who lived it.”

Born in 1928, Howard Chandler grew up in the town of Wierzbnik in Poland. He was a preteen when the occupying German troops barred all Jewish children in town from attending school and confined Jews to the ghetto. His father had been a merchant but had to give up his business. He took a job in 1941 at a munitions factory, turning out arms for the Germans. Howard’s older brother, Harry, worked at the factory, and their father later obtained work permits for Howard, his sister and their mother. Workers in the factory thought they were safe from expulsion. But one day in 1942, Howard’s mother, sister and younger brother were rounded up.

“That was the last time I saw them,” says Chandler.

In 1944, with the Russians nearing, the Germans closed the factory. Chandler and his father and brother had been living in a labour camp at the factory. Howard was 16 that summer when all three were rounded up along with other workers and loaded onto freight cars. “I don’t know how long we travelled, it seemed like an eternity.” Crammed into the car with no room to sit, he says, “We didn’t realize that (some of the) people standing were dead. There was no room for them to fall.” 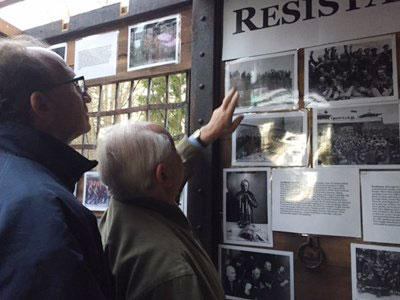 Howard Chandler points out to son, Mark, a photo of the freight car in which he and other concentration camp survivors travelled between Germany and Czechoslovakia near the end of the Second World War. Photo by Iris Chandler.

Their destination was Auschwitz. There, he says, “people were chasing us out of the wagon, they had striped pyjamas. There were dogs, rifles. We believed they were going to kill us. There were four big chimneys belching smoke, smelling of flesh.”

After being registered and tattooed — Chandler rolls up his shirt sleeve to show the number on his left forearm, A19831 — they were assigned to barracks. Nearby was another barracks housing German-speaking gypsies. On that first night in Auschwitz, Chandler was kept awake by barking dogs, shouting and rifle shots. “In the morning there wasn’t a gypsy left.” His brother was eventually sent to another camp. Next to go was his father.

“As they were marched out, I had an extra sweater. I tried to throw it across the barbed wire to my father. An SS guard shot at me. That was the last time I saw my father.”

In January 1945, Russian troops were nearing Auschwitz. Chandler was sent aboard a freight train to Buchenwald concentration camp in Germany. There he met up with his brother. That spring they were loaded up yet again, this time on a train carrying some 3,000 Russian prisoners of war.

In Sir Martin Gilbert’s book The Boys: Triumph Over Adversity, published in 1996, Chandler says, “We were packed onto an open freight train and shuffled to and fro, depending which way the front was moving. We shuffled like this for four weeks, on two days of rations, and it took a very heavy toll. It was the worst time ever since entering the camps.”

It was near the end of that journey that the train arrived at Theresienstadt, where the photo was taken of the boys’ open wagon. Chandler remembers looking down at the photographer, a Czech partisan. He’s just out of the photo frame; his brother was lying sick on the floor of the wagon. The photo also appears in Gilbert’s book. Out of roughly 3,000 people who had embarked on the train, only about 500 were still alive. They arrived in the Theresienstadt concentration camp and waited for final liberation. It came in early May with the arrival of Russian troops.

“I felt indifferent,” says Chandler. “I don’t remember being jubilant or happy.”

What sustained him during the ordeal? “You couldn’t see light at the end of the tunnel,” he says. “The hope that you would be reunited with the family that you got separated from — that’s what kept most people going. If you gave up hope while in camp, you were gone. You died in a short time.”

In August, he and Harry were among 732 orphaned concentration camp survivors flown to England to be rehabilitated. The youngsters were sponsored by the Central British fund, a Jewish organization helping refugees since the early 1930s. Harry stayed in England and eventually married there. He died 10 years ago. After two years in England, Howard travelled to Canada to join two aunts in Toronto, where he became a jeweler. His wife, Elsa, also a Holocaust survivor, served as a school board trustee in Toronto for many years.

Referring to Canada, Howard says, “If you want to become somebody there is an opportunity to do it here.”

Neither parent talked about their experiences until Mark — the youngest of their four children — asked his father about his family roots for a school project.

Today, Howard visits schools, universities and community groups to speak about his experience. He has led tours in Poland under Classrooms Without Borders, run by the Jewish Federation of Greater Pittsburgh. That organization filmed a documentary in 2012 about Chandler called Memory: A Holocaust Survivor’s Story.

In 2013, Alexandra accompanied her grandfather to Poland. They did the March of the Living, a three-kilometre walk between the Auschwitz and Birkenau concentration camps.

“We’re one of the last generations to hear first-hand these stories,” says Alexandra, a third-year arts and science student, and co-president of the Hillel Guelph student group. Referring to the photo of the train wagon, she says, “It shows that, at liberation, after all the hard times and suffering they could still smile and rejoice.”