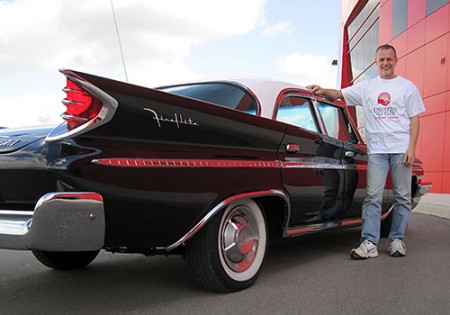 Attention distracted drivers: keep your eyes on the road if you see Prof. Brad Hanna driving his 1960 DeSoto Fireflite. He doesn’t want to cause an accident, but he’s used to getting attention from passersby, including police officers and Hells Angels. One driver almost swerved off a four-lane highway when he saw Hanna driving his classic car; other drivers have run through stoplights.

“I have a really rare car that people like to see,” says Hanna, Department of Biomedical Sciences.

Hanna will give a lecture about his DeSoto at the end of the fall term as part of a United Way fundraiser in which students collect money and ask their professors to give a lecture on a topic of their choice. Other lectures include food science professor Doug Goff, who will talk about 100 years of ice cream and making ice cream for special occasions; and economics professor Evie Adomait who will hold a series of classroom question and answer periods with students.

Growing up in the ’60s and ’70s sparked Hanna’s car enthusiasm. “For those of us who grew up with these cars, it can be a nostalgia trip to see one today,” he says. As he approached his 50th birthday, he considered buying a Mustang but decided against it because of how common they are. He purchased a 1960 DeSoto instead, one of about 7,000 vehicles made that year by the company, a division of Chrysler, before it went out of business.

Hanna bought the car on Vancouver Island in 2012 and had it delivered by boat and train. After spending years parked outside in the Vancouver elements, the car needed extensive work to repair corrosion and water damage from a leaking roof.

When his other vehicle broke down shortly before a trip to Ithaca, New York, he decided to drive the DeSoto. At the border crossing, the officer was more interested in asking him questions about the car than about any restricted items he might be bringing across the border.

People often honk at him or give him a thumbs up as he drives by. Even a police officer expressed his admiration for the DeSoto.

“Motorcycle gangs seem to like old cars,” Hanna says with a laugh as he recalls how one gang was checking out his car on the highway. “They looked like serious hard-core bikers.” As they drove away, Hanna noticed they were wearing Hells Angels jackets. “I’m not sure that’s the crowd you want to be attracted to your car.”

The DeSoto almost had a brush with fame when Hanna was approached by a movie industry rep while he was parked on Wellington Street in Guelph. The rep later contacted him in November 2014 and asked to use the car in an upcoming movie about Marilyn Monroe. The car would be driven by an actor portraying Joe DiMaggio.

Hanna was floored. “My old beater from Vancouver Island was one of thousands of cars they could have picked.” Unfortunately, his DeSoto wasn’t ready for its close-up. The car had been stripped for restoration, including its paint and about 200 parts, so the movie went ahead with another vehicle.

Another opportunity came up during the filming of a television series about the John F. Kennedy assassination starring James Franco, part of which was filmed in Guelph. But the car still wasn’t ready.

Since then, two other movie companies have contacted Hanna, but so far nothing has been finalized. Hanna remains hopeful: “There’s always a chance.” Classic cars are rarely seen on screen unless it’s a period piece. He believes his DeSoto is the only vehicle of its kind in Ontario.

Most of the car’s restoration has been done by professionals, but he has done some of the work himself, including polishing the 21 metres of stainless steel trim on the exterior. His car is so rare that it’s difficult to find replacement parts. If he can’t find them at a wrecking yard, he needs to get them custom made or sourced from another model if it’s compatible. The radio runs on vacuum tubes and takes about one minute to warm up.

“I never want to get rid of this car,” says Hanna. “It’s kind of like a rolling museum piece.”

For more information about U of G’s 2015 United Way campaign, visit www.uoguelph.ca/unitedway.