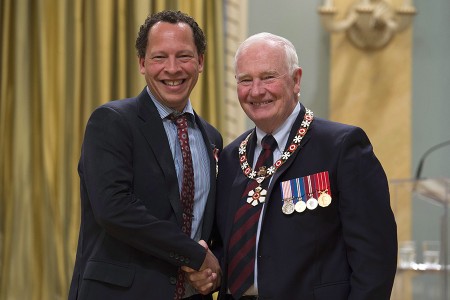 Creative writing professor Lawrence Hill has been invested into the Order of Canada, considered the country’s highest honour for lifetime achievement.

Hill was honoured by Governor General David Johnston during a ceremony at Rideau Hall Sept. 23. He was among 36 new Members welcomed into the Order of Canada, along with nine new Officers and one Companion.

The Order recognizes Canadians for achievements and service to the country in numerous fields.

Hill has advocated for free expression and for discussing race in Canada.

Among his 10 books of fiction and non-fiction, Hill’s best-known work is The Book of Negroes. The novel has received numerous accolades, been translated into 10 languages and published around the world, and made into a television miniseries.

His novel The Illegal won CBC’s Canada Reads 2016, the second Canada Reads win for Hill. He is adapting the novel, inspired by worldwide refugee stories, for another television miniseries.

He has received the Rogers Writers’ Trust Fiction Prize and the Commonwealth Writers’ Prize. Hill chairs the jury for the 2016 Scotiabank Giller Prize, viewed as Canada’s top literary award.