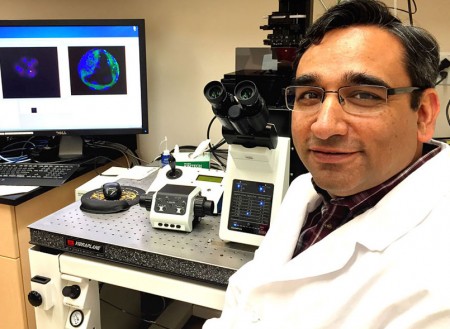 Fifteen years ago, about one in 10 couples coped with infertility in North America. Today, it’s a growing problem, with one in six struggling to conceive. Biomedical sciences professor Pavneesh Madan, a faculty member at the Ontario Veterinary College at the University of Guelph, is studying embryo health in cows to help increase pregnancy success for people undergoing in vitro fertilization or embryo transfers.

The dairy industry needs cows to produce calves every year to keep milk production high. Most farmers in Canada use a technique called embryonic transfer, where a fertilized egg is implanted into the cow. About 90 per cent of the time, fertilization of the egg is successful, but up to 40 per cent of the time, the embryo dies early in the pregnancy. This loss is called early embryonic failure (EEF).

“This is costly for the farmers and means a delay in getting the cow pregnant again,” says Madan. He is studying ways to separate the healthy embryos from the ones that are less likely to survive, allowing farmers to improve the odds of a successful pregnancy. Many of the methods previously used to assess the viability of embryos were invasive, increasing the risk of EEF.

Madan theorizes that a healthy embryo being cultured in artificial media is absorbing nutrients from the media and eliminating waste products, while an unhealthy embryo would be doing this less. He and his students took samples of media from large numbers of embryos and identified certain markers that are often seen in the healthier ones. He’s currently working to validate the results.

With this promising work underway, Madan has turned his attention to the issues of human infertility.

The development of embryos in cows is similar to the development in humans, according to Madan. “Like humans, cows release one egg per cycle, and the embryo makes the transition from maternal control to embryonic control at the eight-cell stage in both. So, it makes sense that what we are learning in cows can help us solve problems in human fertility as well.”

For humans undergoing an embryotic transfer, multiple embryos are often implanted in the mother’s body with the expectation that a significant proportion will fail. This can lead to considerable grief and suffering if the mother miscarries. It can also be costly if several embryos survive and the mother becomes pregnant with higher-order multiples. “The multiple births due to embryo transfer cost the Canadian medical system more than $1.1 billion annually,” says Madan.

Madan is now working with three Ontario infertility clinics to further study his techniques to assess the health of embryos. The embryo media is first tested for about 89 metabolites. Once the embryos are implanted in the mother, Madan notes which embryos survive and which fail, and compares these to the metabolites recorded.

He hopes to establish a simple process where a drop of media can be quickly analyzed, allowing the physician to determine which embryos are most likely to be healthy, avoiding the need to implant multiple embryos.