Salmon have an ace up their sleeve — or in their gills — when facing challenging conditions that could affect their hearts, according to a study led by a University of Guelph researcher.

The paper, published as a featured article in the Journal of Experimental Biology, looked at an enzyme that helps protect fish hearts during periods of low oxygen (hypoxia) or after intensive exertion such as swimming upstream. 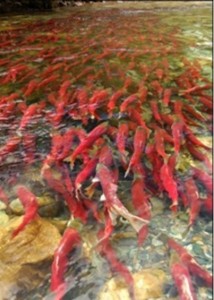 The researchers found that carbonic anhydrase (CA) can help improve delivery of oxygen to the heart.

With poor water quality or more strenuous activity, fish lacking enough of this enzyme in the heart may become too weak to return to their spawning grounds, said lead author Sarah Alderman, a post-doctoral researcher in the Department of Integrative Biology.

“As temperatures rise, the oxygen level of rivers goes down, and many salmon die before making it back to their spawning grounds to reproduce,” she said.

“This enzyme could allow some fish to live by providing an oxygen boost to their hearts right when they need it most. This would be a huge advantage during the spawning migration, and could dictate which fish get to spawn and pass on their genes to the next generation.”

Unlike mammalian hearts, Alderman said, a salmon’s heart lacks blood vessels to deliver its own blood supply. The heart gets most of its oxygen from the blood pumping through its chambers.

As the heart is the last organ in the fish’s body to receive blood before it returns to the gills, the ceaselessly contracting muscle could come close to failing if the blood lacks enough oxygen.

“That means it can be a struggle for salmon when they’re racing upstream to spawn,” she said.

Oxygen-carrying hemoglobin in fish blood is finely tuned to blood pH. The more acidic the red blood cells, the less oxygen can be carried by hemoglobin.

“If there is CA around, the enzyme can rapidly cause the red blood cells to become acidic and force hemoglobin to release more oxygen,” said Alderman.

Working with researchers at the University of British Columbia, she found that salmon hearts have this targeted oxygen delivery system, with CA inside the heart’s chambers.

She is now working with Prof. Todd Gillis to examine how fish hearts respond to environmental stressors including bitumen exposure and hypoxia. Those studies are expected to be published later this year.