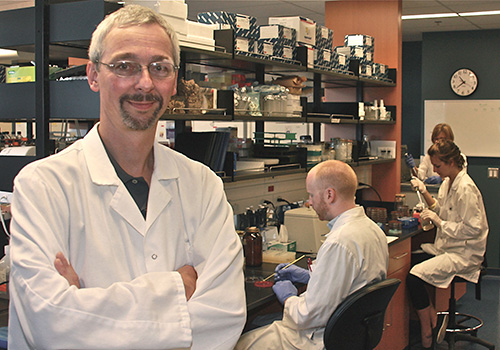 Antibiotics have saved millions of lives by killing the bacteria that make people sick. But the bacteria are now fighting back, as more of them become resistant to those important medications.

Molecular epidemiologist Prof. Patrick Boerlin is working with researchers in the United States and Alberta on several projects, studying antibiotic resistance in bacteria from beef cattle. Earlier this year he received a five-year grant from the Natural Sciences and Engineering Research Council to further study this issue in chickens, pigs and dogs. These studies will also ultimately have an impact on people.

Boerlin is tracking resistant bacteria using their DNA, making it possible to identify particular strains as they pass from animal to animal or person to person (and in some cases, between animals and people). In many cases, however, the genes that make bacteria resistant to antibiotics are found on plasmids and other “mobile genetic elements” that can be passed from one bacterium to another.

In yet another twist, even the good bacteria are spreading resistance. Our bodies contain large numbers of these non-pathogenic bacteria, and they are important to our health. But these harmless bacteria can have plasmids carrying genes that make them resistant to antibiotics, and they can pass these plasmids on to unfriendly bacteria that invade our bodies.

“This is why my colleague John Prescott says ‘resistance anywhere is resistance everywhere,’” says Boerlin.

Using their understanding of DNA, Boerlin and other researchers are seeking to identify the main pathways for these resistance genes by “fingerprinting” the genes in question and looking for matches. Are these bacteria infecting people through food or direct contact with animals or other people? Do bacteria in animals acquire resistance from those found in humans? Knowing the source of resistance genes will help develop better strategies to block those pathways.

Boerlin is also probing why some resistance genes stay with only one host, while others transfer readily from species to species. “For example, there are some genes seen only in bacteria from pigs and rarely anywhere else, yet others are seen in bacteria from pigs and many other species,” he says. “If we could find out why some don’t cross over, it could possibly help us stop the others.”