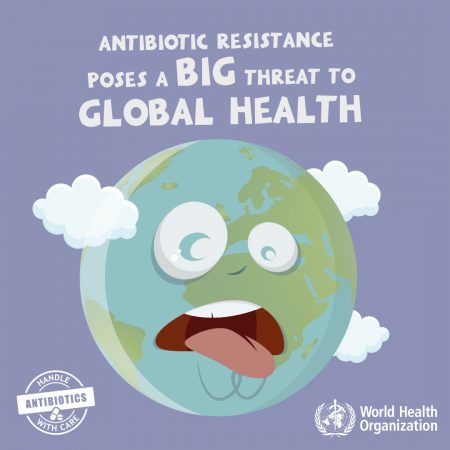 University of Guelph scientists have worked for years to better understand antibiotic resistance, a deadly problem around the globe and a topic that is increasingly in the public arena.

According to the WHO, AMR-related deaths – especially from so-called superbugs that can’t be controlled by conventional antibiotics – are estimated to top 700,000 annually. WHO predicts the annual global death toll will rise to 10 million by 2050.

Research to understand and prevent the emergence and spread of AMR is ongoing in laboratories around the world, including at U of G where researchers collaborate with agencies in Canada and abroad.

Studying human and animal bacteria: Patrick Boerlin, a pathobiology professor in the Ontario Veterinary College (OVC), is part of a $2-million transatlantic study examining thousands of types of bacteria in chicken, swine, cattle, dogs and humans to better understand the spread of antimicrobial resistance. The researchers study transmission of bacteria and how they become resistant to treatment, particularly treatment with an important family of antibiotics known as cephalosporins. The study, which involves researchers in the United Kingdom, France and Germany, aims to pinpoint the optimal time to intervene in order to slow AMR. Boerlin also studies antimicrobial resistance in E. coli and salmonella genes.

Spread of disease from pets to humans: Pathobiology professor Scott Weese has begun a three-year study of diseases that can spread to humans from pets. According to the WHO, overuse and misuse of antibiotics in animals and humans contribute to the rising threat of antibiotic resistance, and may be helping to spread animal-to-human disease. Scientists know that animals share antimicrobial-resistant bacteria and genes with humans, but they don’t know how much overlap exists, Weese says. He aims to design and evaluate preventive and intervention measures for controlling AMR and reducing public health impacts.

Finding a new target for antibiotics: Anthony Clarke, a professor in the Department of Molecular and Cellular Biology, studies a bacterial enzyme that could make deadly, antibiotic-resistant bugs less resilient and more vulnerable to drug treatment. Bacteria have extraordinary capabilities to produce a variety of defensive enzymes. Just as one enzyme is subdued by a drug, another is released to resist the treatment, Clarke says. He and his research team have studied a particular enzyme – known as “Ape” – that could be the chink in the armour of deadly bacteria. He studies infectious organisms that are impervious to drug treatments in order to find new ways to combat disease.

Virulent bacteria the problem in meat: Mike von Massow, a professor in Food, Agricultural and Resource Economics, has lately studied antibiotic use and resistance in meat products. In a recent interview on the CBC News program On the Money, von Massow said many consumers think antibiotics in meat products are the main problem. The real concern, he said, is that using antibiotics can lead to the development in animals of drug-resistant superbugs that may then be transmitted to people. The quantity of antibiotics in meat has never been a risk, he said, because it is most often minimized before meat products come to market. The World Health Organization advocates for ending antibiotic use on healthy farm animals, and Canada is bringing in federal measures in line with its recommendations, he added.

Sharing expertise with the world: Scott McEwen, professor in OVC’s Department of Population Medicine, has consulted on antibiotic resistance with national and international organizations, including the WHO, the United States Food and Drug Administration, and Health Canada. McEwen studies the epidemiology of food- and water-borne infections in animal and human populations. His research group is determining risk factors for infection and evaluating control methods. McEwen, Weese and John Prescott, professor emeritus in Pathobiology, contributed to the Pan-Canadian Framework on Antimicrobial Resistance that was released in September. More than 50 OVC graduate students have studied aspects of antimicrobial resistance in animals and food during the past 20 years.