#CallItFemicide: U of G Honours International Day for the Elimination of Violence Against Women

Every two days, a woman or girl is killed in Canada.

If she is Indigenous, she is six times more likely to be killed than a non-Indigenous woman.

It’s been 33 years since 14 women were killed in a massacre at École Polytechnique in Montréal, and yet the number of women and girls killed remains stubbornly persistent, according to data from the Canadian Femicide Observatory for Justice and Accountability (CFOJA).

Nov. 25, the International Day for the Elimination of Violence Against Women, raises public awareness of the issue and marks the start of 16 Days of Activism Against Gender-Based Violence.

“I think we’ve seen a real backlash against women’s rights in the last couple of years,” said Dr. Myrna Dawson, professor in the College of Social and Applied Human Sciences, who holds a Research Leadership Chair at U of G.

“That has an impact on experiences of violence.”

Dawson founded CFOJA in 2017 to document femicide as it occurs in Canada and to monitor state, legal and social responses to those killings. Femicide is not recognized in the Criminal Code of Canada. Part of the work CFOJA does is advocating to change that: to #CallItFemicide.

This year’s #FemicideIs campaign seeks to increase public awareness and education about what it means to use the term femicide – to capture how and why women and girls are killed.

With no official recognition of femicide, Dawson said researchers are left without official data, relying on media reports and court documents to track the consistent increase of incidents of sex- or gender-based violence.

In September, the London Police Services Board in London, Ont. joined the call after requesting a demographic breakdown of hate crime incidents and learning that information was unavailable. The board then asked the government to add femicide to the Criminal Code and passed motions requiring police to investigate crimes that target women and girls as potential hate crimes. 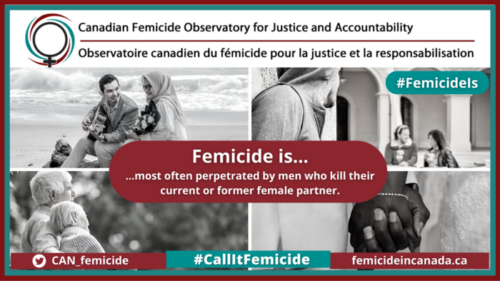 “Women are very rarely in hate crime statistics unless it is related to race or religion, more commonly recognized hate crimes, although still underreported,” Dawson said, adding the London police board’s actions were followed by a similar request to add femicide to the Criminal Code resulting from the 2022 inquest into the femicide of three women by one man in Renfrew County.

In November, the federal government announced a 10-year National Action Plan on Violence Against Women and Gender-Based Violence, containing 100 recommendations and more than $500 million to address the issue.

Women’s groups and anti-violence groups across the country Dawson has worked with over the years have been waiting more than a decade to see a national action plan addressing gender-based violence.

Characteristic of others before it, such as the Missing and Murdered Indigenous Women, Girls, and 2SLGBTQQIA+ National Action Plan, the plan appears to lack detail, action items and even references to the root causes of gender-based violence, such as patriarchal structures and misogyny, Dawson said. 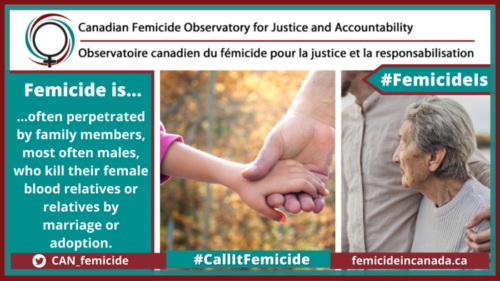 “Given how long the country has waited for this, it would have been nice to see something more concrete,” she added.

Decades of research exist that Dawson feels could have laid the foundation to develop an action plan. There is no reference to any of that research and the word femicide appears only once in the document. “We have a national plan, which feels like a framework, but it needs action pieces,” she said. “And they need to tell us how it is going to be implemented and how they are going to monitor the implementation.”

What is needed now, Dawson said, is research on populations that have historically been invisible – newcomer, refugee and immigrant women and girls, LGBTQ2SIA+ communities, young people, elderly women – as well as victims of violence and abuse in the cyber world.

Intersectionality the crux of understanding how to end gender-based violence

In a week that begins with Transgender Day of Remembrance, followed by the International Day for the Elimination of Violence Against Women and the 16 Days of Activism Against Gender-Based Violence, there is a thread that runs through.

“I think, in part, the reason why people don’t see the connection is because they don’t see the root causes. It’s not just gender inequality,” Dawson said. “It’s gender intersecting with other types of oppression: sexuality, age, race, ability.”

The root causes are a symptom of how structures impact individuals who have intersecting identities, and many of those structures are patriarchal, and dominated by white males.

“Women are a group that have been discriminated against, but women are not a homogeneous category,” she said.

Learn more about the CFOJA’s campaign for the 16 Days of Activism Against Gender-Based Violence here.