University of Guelph staff member and alumna Nasrin Husseini has been named to the prestigious BBC 100 Women list for 2021.

She is among 50 exceptional Afghan women included on this year’s 100 Women list, launched on Dec. 7.

Each year, the global celebration of women features a multi-format series of broadcasts, online reports, debates and multimedia journalism that examine the role of women in the 21st century. The list is announced at the start of BBC’s “women season,” held over three weeks around the globe.

Girls are banned from secondary education, the ministry for women’s affairs has been disbanded, and many women have been told not to return to work. Their stories, bravery and achievements will be at the heart of BBC 100 Women.

“I am honoured to be on the same list as those 50 strong Afghan women and part of the BBC 100 Women,” said Husseini, a former veterinarian in Afghanistan who fled the country in 2010 when it became unsafe for her to stay. At that time, threats from Taliban supporters had intensified for women in professions traditionally reserved for men. Now, the situation is much worse, she said. 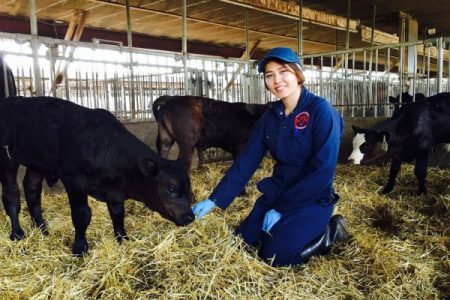 Husseini was the first woman in her native country to graduate from Kabul University’s veterinary medicine program in 2011 after the collapse of Taliban rule in 2001. Whether in this country or in her homeland, she has advocated for the equality of women in Afghanistan.

She earned an M.Sc. in immunology at U of G in 2020 and is now a research assistant in the Department of Pathobiology. She was among the first graduate students to receive the $50,000 Arrell Food Institute scholarship.

“I admire those Afghan women who are working from inside Afghanistan,” she said. “For me to be considered on the same list with them is a great honour. They are putting their lives in danger, and I am just working from outside the country.”

Husseini was nominated for her courageous efforts to advocate for the rights of women and girls in Afghanistan and for her academic achievement.

She is a member of the Hazara, one of Afghanistan’s largest ethnic minorities and one persecuted by the Taliban. Since the Taliban regained control of Afghanistan last summer, conditions for the group and for women and girls in general have rapidly worsened, she said. Many people in the country have fled or gone into hiding.

“For as long as I can remember, I was advocating for women, even when I was still living in Afghanistan,” Husseini said. “I went to a vet school, which was a very unusual thing for a woman in Afghanistan to do.”

She worked extremely hard to be the top student in her program, “regardless of how much I was pushed down and told to quit the field.”

“Right now, because of the crisis that has happened in Afghanistan, I didn’t think for a second — I just started helping and working for Afghan refugees. The highlight of this work was approaching Danby Products Ltd. in Guelph and getting the company’s support.”

‘People are counting on me now’

Husseini volunteers with Canadian Hazara Humanitarian Services, a non-profit organization that has partnered with Danby to settle Hazara refugees in Guelph.

Husseini said being included among the 100 Women has made her more determined than ever to continue her activism in support of the women and girls of Afghanistan.

“With this recognition, I think the weight is heavier on my shoulders and I have to do more,” she said. “People are counting on me now.”

She said in the first two months after the Taliban regained control of the country, she was in shock and great distress.

“They forced girls out of school and women can’t go back to work,” she said. “There are no jobs and widespread poverty in the country. And this is happening after 20 years of relative good, when women could work and go to school. Now, I feel sort of hopeless about the situation.”

She hears from her many contacts in the country that conditions are growing worse. Out of desperation, forced marriages are increasing, with many families promising their young daughters in exchange for money.

Husseini hopes Canadians will support the people of Afghanistan during the current crisis. She sees an opportunity for the Canadian government to assist Afghan refugees currently living in Iran – many of them academics with graduate degrees – to come to Canada, as well as minorities that fled Afghanistan and are now in a second country.

“If I have one request for the Government of Canada, it is to make it easier for Afghan academics to come to Canada, continue their research or work in this country,” she said.

The BBC 100 Women includes climate activists and grassroots leaders, international CEOs and “megastars” playing their part to “reinvent our society, our culture and our world after the global pandemic has forced so many of us to reassess the way we live.”

All 42 language services that make up the BBC World Service will be used to tell the women’s stories.