A second run of a beer made with wild yeast collected during a “yeast safari” on the University of Guelph campus proved just as popular as the first, selling out quickly after going on sale this past spring.

Experimental Farm Ale was created using yeast discovered on the U of G campus and was re-launched this past June in concert with U of G’s alumni weekend by Guelph’s own Royal City Brewing Co.

As it did when first launched in November 2020, the beer was a hit, with Royal City Brewing selling out in just three weeks. But before it was all gone, U of G alumni were able to sample the unique brew during an online tasting event held as part of alumni weekend.

Royal City Brewing’s Dan Schmidt, a master beer sommelier, led the event for more than 150 alumni – the brewery’s biggest online tasting event ever. Alumni young and old signed up to receive a delivery of six Royal City brews and alumni-branded coasters and take part in the tasting event to learn more about how each beer was made. 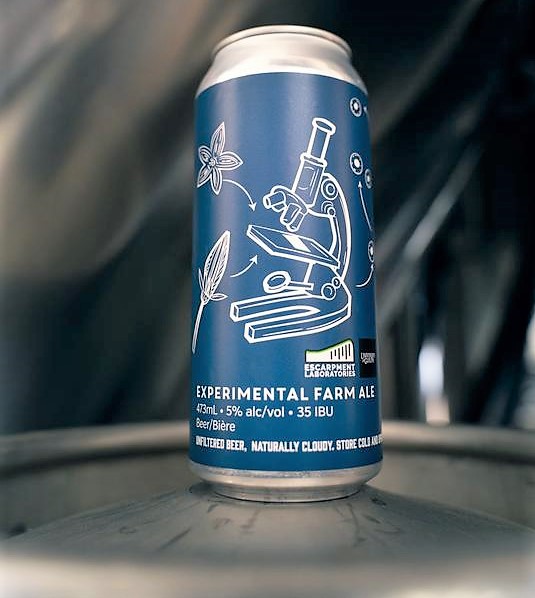 That included Experimental Farm Ale, which has its own made-at-U of G story. It began at the Guelph Food Innovation Centre, where director Derek Vella and U of G Brew Lab manager Shane Walker set out to develop a new beer with a U of G spin.

Previous beers developed at U of G used food products that had a connection to the University, including one that combined honey from the U of G apiary and raspberries from the Guelph Centre for Urban Organic Farming. Another used a heritage barley called OAC 21, which had been developed more than a century ago at the Ontario Agricultural College.

For this beer, they contacted Escarpment Labs, a company founded by U of G graduates that harvests, cultivates yeast to commercial and home brewers, and asked for their help finding a distinctive strain of yeast on the campus that could be used for making beer.

So on a cool day in the fall of 2019, the team set out on a campus “yeast safari” to find the ideal starter, collecting 35 samples from flowers and tree bark at the U of G Arboretum and fruit and vegetables from the organic farm.

The samples were incubated in a sterile wort – the liquid made from mashed grains that begins the beer-making process – spiked with ethanol to isolate yeasts that could withstand the brewing process.

After several weeks of lab work developing pure cultures, two suitable yeast candidates were found. Each was brewed into a simple beer and the winner chosen: wild yeast collected from a squash blossom at the organic farm.

Though it may be tempting to assume the yeast chosen for a beer is not that important, it can be just as important as the barley or hops.

“The yeast plays a big role in the flavour,” Walker said last year. “Once we brewed both yeast samples, you could definitely taste differences in their flavour profile. The one we chose has a bright green apple flavour, while the other was more citrusy with some bitterness.”

Walker used the yeast to develop a beer recipe at the U of G Brew Lab, which was established in 2016 to enhance Department of Food Science teaching on food microbiology, fermentation and cereal science.

He created a British golden ale and brought his creation to the brewers at Royal City Brewing, who tweaked the recipe further and began brewing up a batch of Experimental farm Ale.

“A lot of work went into this beer, but what we helped create is a naturally unfiltered golden ale that has what I’d call a refreshing character with moderate bitterness,” said Walker.

Fifty cents from every can went to ARCH Guelph, which offers services to people affected by or at risk of HIV and AIDS in and near Guelph.

The squash flower yeast is now stored at Escarpment Labs, ready to be grown up to brew another batch whenever needed.

This is the sixth beer developed at U of G. Given Experimental Farm Ale’s success, Vella and Walker hope for many more collaborations to come.