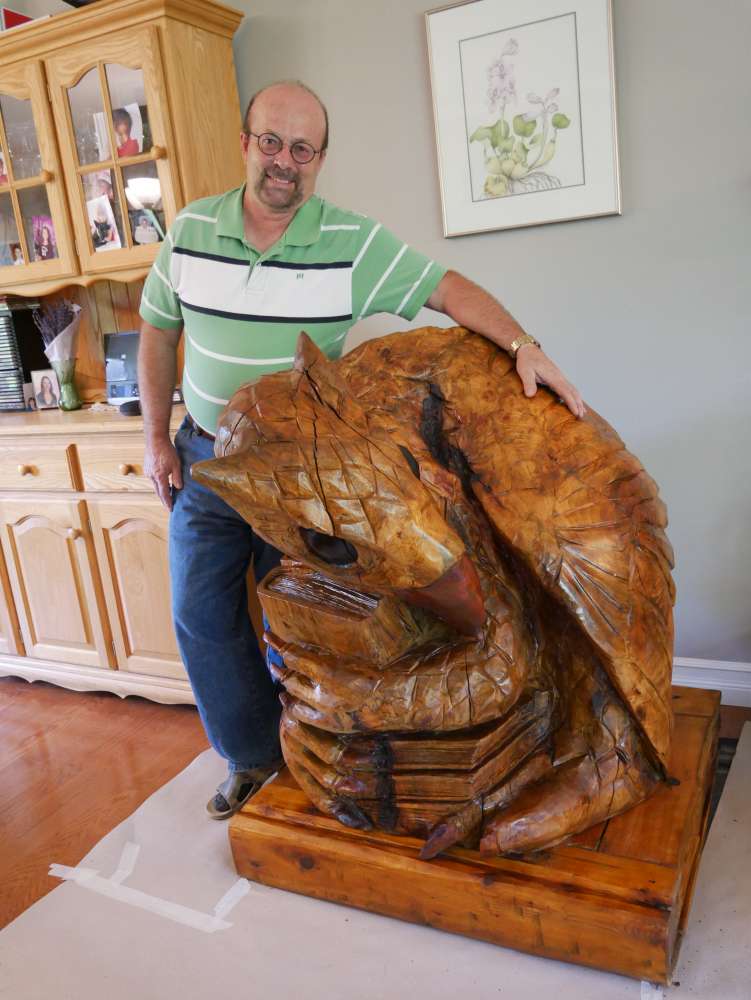 Dr. Rod Merrill with Gryphy, a 318-kilogram creature carved from a maple stump.

A University of Guelph professor has transformed a massive section of a maple tree into a mythological creature that has special meaning for the University.

Last summer, Dr. Rod Merrill, professor in the Department of Molecular and Cellular Biology, came across an enormous sugar maple stump with a “free” sign on it. He had the estimated 680-kilogram (1,500-pound) stump transported to his home north of Guelph.

Soon, he imagined that a hulking Gryphon may be trapped inside it. He enlisted famous chainsaw carvers to set it free.

Part lion, part eagle, the Gryphon is the namesake of U of G’s sports teams and a prominent symbol of the University. Traditionally, the creature is known for guarding treasures and priceless possessions. Merrill’s “Gryphy” is a protector of knowledge, he said. 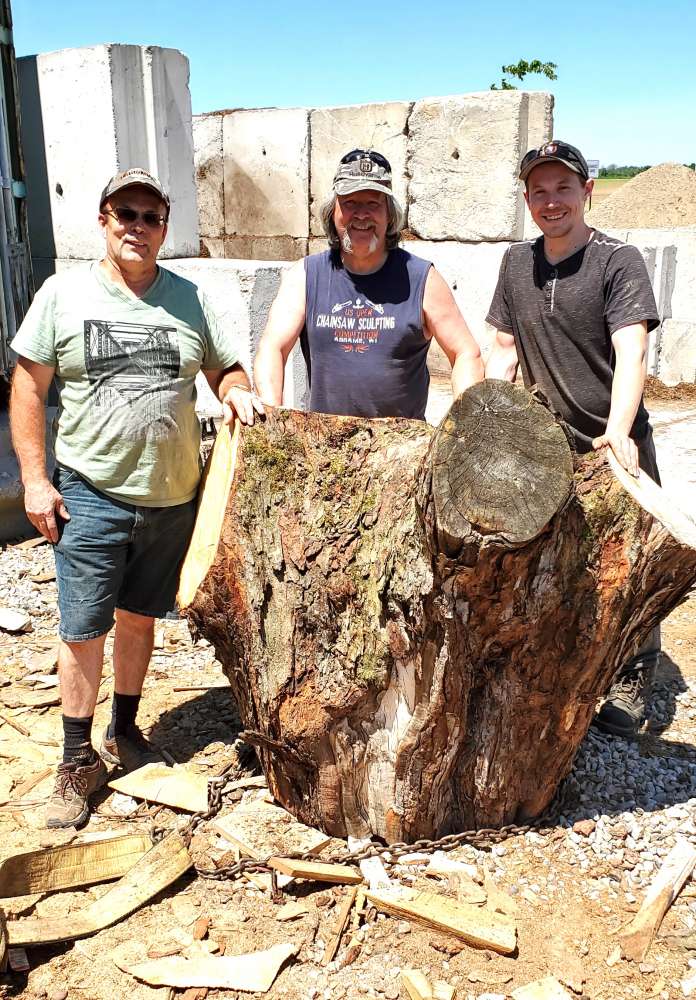 He said the sculpture is a kind of retirement gift to himself and he hopes it inspires others to see the potential locked up in wood. He retires from teaching in the fall but will continue his research for a time.

“When I saw a stump that large, in such great shape, I thought at the least I could mill it and make tables out of it,” he said. “But as I looked at it, wondering what it could be, I remembered the television series Carver Kings, about a group that made large carvings with chainsaws. I thought maybe I could have them carve the Guelph gryphon.”

The carvers got to work on the stump in their Wallenstein, Ont., workshop west of Guelph. Initially, they planned to replicate the giant bronze Gryphon statue made by the U of G creative team FASTWŰRMS and permanently installed on campus in 2014.

But the features of the stump dictated a somewhat different direction. The results, Merrill said, were beyond his expectations.

He and his wife, Barbara, a U of G staff member, now have the roughly 318-kilogram (700-pound) “Gryphy” sitting on their living room floor. Shining with several coats of timber oil and polyurethane, the creature clutches two books and is seated on a much larger book that acts as a platform.

“I had to convince Barbara that putting it in the house was a good idea,” said Merrill, adding that leaving it outside would have resulted in rapid deterioration from the elements.

Moving the sculpture into the house proved to be one of the most challenging steps in the project.

“It was not an easy job getting it inside,” Merrill said. “We have a compact Massey Ferguson tractor and we rigged up a harness for the carving. But the tractor couldn’t lift it.”

It eventually took a team of five, a sturdy four-wheel cart, a custom-built ramp and a neighbour’s large tractor to get the job done. But there was a hiccup.

“Gryphy was too wide by two inches,” Merrill said. “I had to cut one of the rear toes down with a saws-all, then we were able to pop it through the door. I later glued the toe back on.” 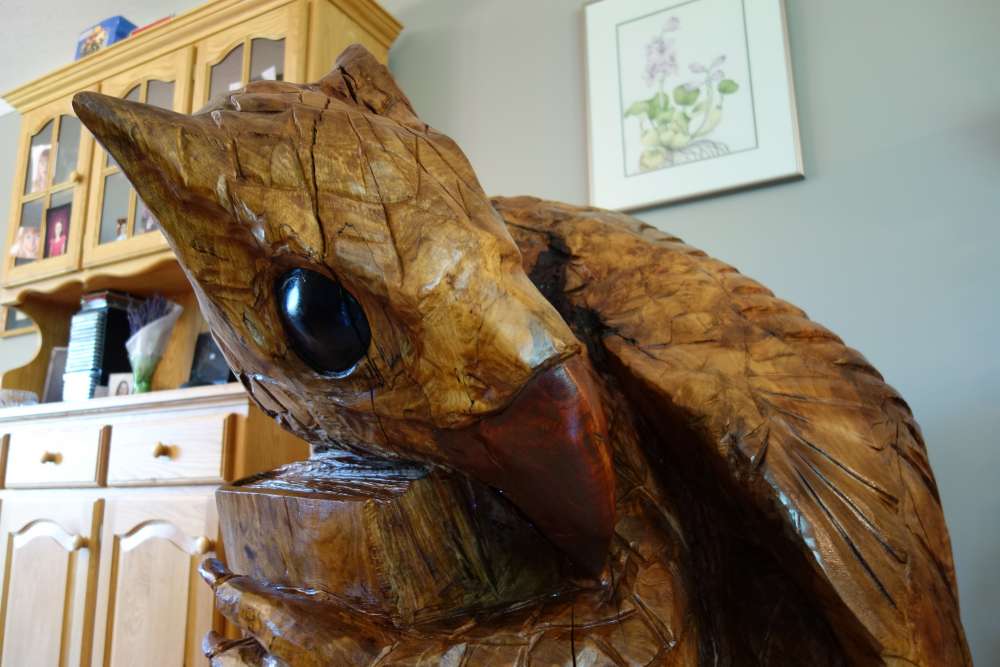 Carver Paul Frenette sees the wooden Gryphon as the perfect symbol of a knowledge protector.

“The tree itself is the accumulation of time, life and knowledge, standing strong for 100-plus years and then reclaimed into the Gryphon,” he said. “The life essence of this old soldier, along with our own creative soul, life energy and even life blood, has been imbued into Gryphy.”

Merrill, a 31-year veteran researcher and teacher at the University, studies the structure and dynamic properties of both membrane and soluble proteins, particularly related to bacterial diseases. He said he expects “Gryphy” to have a very long life, if properly cared for.

“It’s a symbol of U of G and really captures the spirit of the University,” he said. “I spent my whole career at U of G, so it is fitting to have this here in our home. I hope it inspires others to make something cool out of these old stumps.”