University of Guelph researchers hope their new discovery will help combat a disease killing honeybee populations around the world.

The researchers have found a toxin released by the pathogen that causes American foulbrood disease — Paenibacillus larvae (P. larvae) — and developed a lead-based inhibitor against it.

The study was published in the December issue of the Journal of Biological Chemistry, and was was featured this week in the Globe and Mail.

The finding provides much-needed insight into how the infection occurs, said Rod Merrill, a professor in Guelph’s Department of Molecular and Cellular Biology and a study co-author.

It also could lead to natural and more effective approaches for fighting the most widespread and destructive of bee brood diseases.

“We are the first to do this,” said Merrill, who conducted the study with graduate student Daniel Krska. Also involved were post-doctoral researchers Ravi Ravulapalli and Miguel Lugo, technician Tom Keeling, and Harvard Medical School’s Rob Fieldhouse.

American foulbrood is found throughout Ontario and Canada, and affects both the honeybee industry and pollinator populations. Honeybees are among the world’s most important pollinators, and their numbers are already falling globally because of disease, pesticide use, climate change and other factors.

The disease spreads readily through spores transmitted within and between colonies by adult bee carriers, Merrill said. 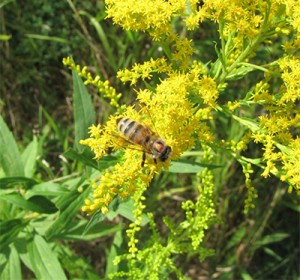 Developing larvae are infected by eating the spores. The larvae die but not before releasing millions of additional spores into the colony. As well, the hive’s weakened state attracts “robber bees” looking for honey, which then spread the disease to other colonies.

Treating American foulbrood is complicated because the disease has evolved over decades. “Antibiotics are not working well to contain it,” Merrill said.
“There are antibiotic-resistant strains flying around, so to speak.”

The only effective control method is to burn the hive and associated equipment, as the spores may remain viable for 40 years.

“Antibiotics are failing not only humans but bees as well,” Merrill said.

“Our approach is designing tools that disarm bacteria without killing them. It does not put pressure on them to mutate because it’s not threatening their survival, it’s just saying, ‘You cannot hurt us, go away.’”

The Guelph researchers identified a toxin, C3larvin, believed to be necessary for the bacteria to colonize a hive.

“Basically, if we can disarm it, it cannot colonize and cannot cause infection in honeybee larvae. It becomes innocuous,” Merrill said.

This initial study only identified and characterized the toxin. “We don’t yet know how important C3larvin is as a virulence factor in P. larvae in infecting honeybee larvae,” he said.

“Once we know what it does, we can inhibit it and that will help protect the bees from this bacterium that is killing their larvae.”

The Guelph team plans to begin field studies on honeybees next spring with the Institute of Bee Research in Hohen Neuendorf, Germany.