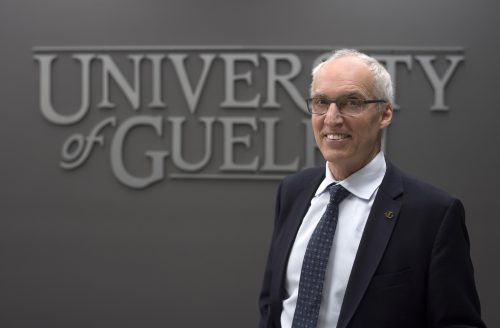 The University of Guelph’s student wellness centre will be renamed as the Vaccarino Centre for Student Wellness to honour U of G’s outgoing president.

The renaming was announced by Board of Governors chair Shauneen Bruder during a farewell tribute this week for Franco Vaccarino, the University’s eighth president.

Bruder also announced that a newly established Franco J. Vaccarino President’s Scholarship will be awarded each year to a top international student.

Bruder said student wellness and internationalization were key priorities for Vaccarino, whose six-year term as president will end this summer.

During a virtual farewell toast on June 16 attended by members of the University’s Board of Governors, Board of Trustees and senior leadership, she said, “Franco’s passion for the University of Guelph and its community is unfailing.

“He has left an indelible mark on our University, elevating its reputation as an integrated, comprehensive university – among the best in Canada, and one recognized around the world for its prowess in veterinary science and all things related to food.”

Bruder also said Vaccarino has represented the University provincially through his leadership role with the Council of Ontario Universities over the past year and has provided counsel to policy makers and politicians at various levels of government.

An internationally recognized neuroscientist, Vaccarino was appointed in 2014 as the University’s president.

Guelph Mayor Cam Guthrie said he appreciated Vaccarino’s emphasis on building the relationship between the University and the community of Guelph.

Vaccarino is credited with strengthening U of G’s status as one of Canada’s top comprehensive universities. Under his leadership, U of G grew in status and achievement for five consecutive years, ranking second among Canadian comprehensive universities in the national Research Infosource Inc. survey. The Ontario Veterinary College (OVC) was tops among Canadian veterinary schools and rose to fifth globally in the World University Rankings.

“If a university is lucky, it gets the leader it needs at a given point in its institutional history,” said OVC dean Jeffrey Wichtel. “The University was fortunate in 2014 when Franco was recruited as president. He was the leader we needed.”

Among numerous initiatives, Vaccarino developed the University’s strategic framework, strengthened its executive team and promoted economic development initiatives. He also worked to elevate the University’s core values of diversity, equity and inclusion, and to apply the institution’s expertise in food, health, environment and communities for solving global problems.

“Franco is a quiet, inspirational leader with great vision and a gentle personality, one who leads by example,” she said. “He is down to earth and very approachable. People want to follow him.”

During Vaccarino’s tenure, U of G also launched the Food from Thought Project and renewed its 10-year partnership with the Ontario Ministry of Agriculture, Food and Rural Affairs.

Vaccarino’s skills as a communicator and listener were among the characteristics that made him a gifted leader, said Charlotte Yates, provost and vice-president (academic), who will serve a two-year term as interim president beginning Aug. 2.

“He has a special ability to engage with all members of the community on a personal level, including students, faculty and staff, donors, government and business partners,” she said. “Those communication skills have benefited the University enormously.”

Following an administrative leave beginning in fall 2020, Vaccarino will return to his neuroscience research and scholastic interests, including continuing to serve as a faculty member in U of G’s Department of Psychology.

He plans to use COVID-19 as a case study for examining leadership and mental health. He will continue working with various organizations, including Brain Canada and the Canadian Centre on Substance Abuse.