The University of Guelph joined other Canadian universities in observing a national moment of silence Wednesday in memory of the people who died in last week’s plane crash near Tehran.

Organized by Universities Canada, the event was aimed at complementing the actions  by universities, communities and countries touched by the Jan. 8 Ukraine International Airlines accident.   At least 46 students, faculty members and researchers from 19 Canadian universities were among the 176 passengers killed.

The Ontario government is creating new post-secondary scholarships to honour the plane crash victims, which will be in place by the 2021-2022 academic year. The scholarships will be based on academic merit and financial need, and recipients will be determined in consultation with the schools and families of the victims.

At U of G last week,  hundreds of people attended a vigil Jan. 10 in honour of two University of Guelph students who died in the plane crash. U of G PhD students Ghanimat Azhdari, who was studying in the Department of Geography, Environment and Geomatics, and Milad Ghasemi Ariani, who was studying in the Department of Marketing and Consumer Studies, were aboard the flight. They were both returning to Canada after visiting family in Iran.

The vigil was organized by the Guelph Iranian Student Association. Held in War Memorial Hall, it included a slideshow and remarks from students and friends of both students, as well as University and community leaders.

“These events are a reminder of the deep cracks in the human condition and, of course, our common humanity,” U of G president Franco Vaccarino said during the vigil.

He added that while at U of G, both Azhdari and Ariani “demonstrated qualities including commitment to learning, generosity, curiosity, and a spirit of collaboration.”

Campus flags were lowered to half-mast last week in honour of Azhdari and Ariani.

U of G Prof. Faisal Moola, who was Azhdari’s adviser, spoke to several media outlets last week about Azhdari’s achievements during the short time she was with the University. She studied biocultural conservation and was a well-respected teaching assistant.

Here is Prof. Moola’s interview with CBC’s As It Happens:

Speaking of Azhdari, Moola told CBC: “she had this effervescent personality. She was small in stature but had the ability to command a room very easily, largely through not just the force of her personality but this remarkable narrative that she was so generous in sharing.”

Moola also told CBC she brought important issues related to Indigenous land conservation to the forefront. She was a member of the ICCA Consortium (Indigenous Peoples’ and Community Conserved Areas and Territories) an international association that promotes recognition and support.

“I’m absolutely convinced that her ideas around advancing and supporting Indigenous people and the protection of their traditional territories is critically important if we are going to protect the planet.”

Ariani was studying consumer behaviour at the University and was working on a research project with Prof. Towhidul Islam. Islam, who spoke during Friday’s vigil, said Ariani was a motivated student who was always up for a challenge. He was given a complex role in a project on gaps between what consumers say they will buy and their actual purchases. Ariani took additional courses on his own time to gain the training required to analyze the research data.

“He was here for a short time, but he made such connections with people and a lasting impression. This is a great loss to our department,” Islam.

Prof. Ben Bradshaw, assistant vice-president (graduate studies), also spoke at the vigil and with media last week, including Global National and CTV National, about the academic success of the two students. 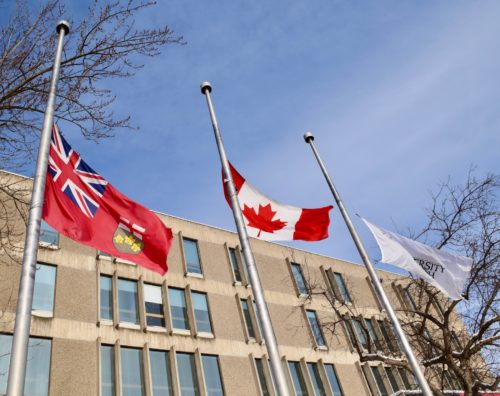 “We are deeply saddened to hear of the tragic loss of two of our students,” said president Vaccarino. “Our thoughts go out to the families of these two students and to anyone else affected by this tragedy. Any loss to our campus community touches all of us.”

U of G students, faculty and staff are reminded that University supports and resources are always available, including the following: