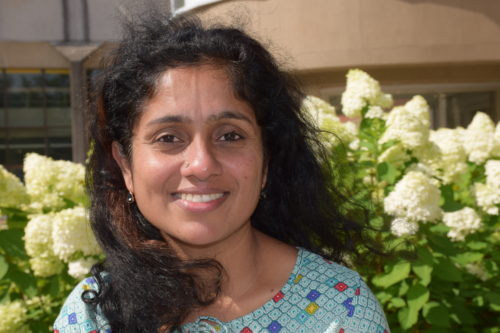 Some years ago, Prof. Sharada Srinivasan began exploring the heartbreaking reality that girls are unwanted in some parts of the world – unwanted to the point of being eliminated at birth.

She began a research journey whose findings continue to preoccupy her.

“I was talking to a lot of mothers who were trying to negotiate son preference, especially in parts of India, and having to get rid of daughters so they could have sons,” said the international development professor, referring to the practice of daughter elimination. “I was trying to understand how women in particular but also families came to make such decisions.”

Some cultures prefer sons for economic, social and cultural reasons, she said, and value girls and women less than boys and men.

“Girls growing up in this context are acutely aware of how unfair and discriminatory it is,” Srinivasan said. “This often translates into not wanting daughters. The odds against girls become very high.”

The United Nations International Day of the Girl on Oct. 11 focuses on the needs and challenges faced by girls and how to empower them. This year’s theme is “GirlForce: Unscripted and Unstoppable.”

Srinivasan, who holds the Canada Research Chair in Gender, Justice and Development, said conditions for girls have changed but not enough.

“The fact that there is an international day for girls is a recognition that we need to do better,” she said. “Around the world, UN agencies and governments have been talking about how to enhance investment in girls’ education, health, nutrition and safety.”

Fostering awareness of the difficult and sometimes extreme challenges faced by girls is vital, she said.

Referring to varying attention paid to girls’ advancement worldwide, she said, “Something is being done, but there is a long way to go, as is starkly evident from the poor performance on the UN Sustainable Development Goals.”

Srinivasan conducted fieldwork in one region of India where infanticide was practised on girls. Selective abortion has also become a common practice.

“What it really helped to show me was that so much of what we do in terms of policy and programs is adult-focused. We don’t really think about children that much. If you talk about international development and policies in developing countries, it’s mostly adult-centric.”

But children know what is going on around them, she said, and girls are hurt and weakened by discrimination.

She interviewed about 10 girls who were rescued from infanticide by a non-governmental organization.

“Those girls were very aware of what could have happened to them: that a lot of other girls in their community didn’t make it.”

Those survivors became ambassadors for preventing infanticide. Instead of being married during puberty, most of them finished school.

“I began to see changes for the better in their lives. But there are pressures on them. They begin to understand the reality of how hard it can be for girls and women and learn how important having a son is for a woman’s status in that context.”

The reality for girls in developed countries is relatively bright, she added. Most have the right to education, health care, protection and much more. But that is a reality for a small minority of girls globally.

Where governments fail to make girls’ rights and well-being a priority — including India, various African nations and conflict-ridden countries like Syria or Afghanistan — girls are at higher risk. But not even developed nations are immune, she said.

After obstacles are removed from the path to advancement for girls, they can and do succeed, Srinivasan added.

“Once you turn the tap on, it’s like you can’t stop the flow.”