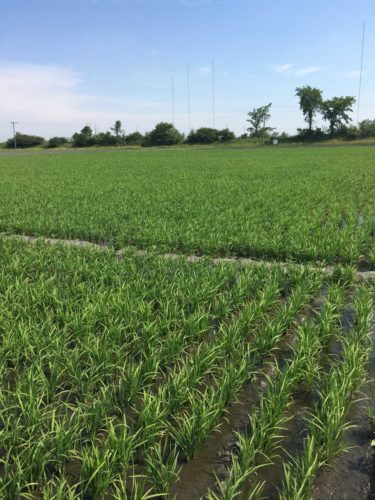 Rice paddies have now become part of the Chatham-Kent agricultural landscape, thanks to a collaboration between industry and University of Guelph researchers.

Ontario FangZheng Agriculture Enterprises along with researchers from U of G’s Ridgetown Campus recently unveiled the one-hectare trial rice crop growing on a farm west of Chatham.

“This is the first Canadian commercial rice production,” said Wendy Zhang, project and farm manager with Ontario FangZheng Agriculture Enterprise, who recently graduated with an M.Sc. from the Department of Plant Agriculture.

The company has been working with U of G’s Ridgetown Campus on the project since 2016.

CBC Windsor covered the news, as did The Windsor Star, the Guelph MercuryTribune and Chatham Daily News.

Leading up to the trial crop, Prof. John Zandstra, along with other Ridgetown researchers, conducted a successful greenhouse study on rice crops grown on campus.

“We were also involved in helping to determine the logistics required for growing rice in Ontario” said Zandstra.

The company chose Chatham-Kent as the spot to plant because it has a warmer climate similar to that of northern China, where rice production has expanded to grow crops that can withstand cooler temperatures, said Zandstra.

The area also has plenty of flat land and water sources – two important factors in growing rice, he added.

While the cool, wet spring caused problems for most farmers, the rice crop benefited from the rain.

“Introducing this crop to the area presents another opportunity for Ontario farmers,” said Zandstra. “We have already had farmers approach us expressing interest.”

Rice is a transplant crop. The plants are placed in the ground in the spring and harvested in the fall.

Zhang began preparing the crop in early April by soaking the seeds indoors. The crop was seeded in a greenhouse in April before being transplanted in May.

The experimental plot will be used to record plant growth and development, determine yield potential and evaluate pest management strategies.

“One focus now will be to get a handle on pest issues,” said Zandstra.

The plan is to plant rice on the entire 30-hectare farm where the first crop is currently growing and to find other land in Chatham-Kent to plant up to 202 hectares next year.